Who would want to live all the way out on 11th Avenue, at 54th Street, no less? What’s there? Nothing! Except the Mercedes House, where the answer to first question appears to be: everyone!

According to Two Tree’s Asher Abehsera, the second phase of the massive Far West Side development have been renting faster than a sports car, with more than half of the units gone since coming on the market a little over two months ago. So far, 174 of the 384 units have been leased, and move-ins are under way—without the help of any outside brokers, Mr. Abehsera said.

“I don’t know that other people have done 170 apartments at market-rate prices with no outside brokers in two and a half months, that’s probably a big deal,” he said.

Mr. Abehsera credits this to factors both in the market and at the company. “I think to some extent there’s obviously a shortage of product in the marketplace, so anything that’s out there and aesthetically is nice, people have a real interest in,” he said. “At the same time, I think, we’re probably doing better because our design is so spectacular. It’s an odd shaped building, it’s really impressive, it really feels when you walk in the lobby or see the building from a distance, it has a premium feel.”

Take a tour of the Mercedes House >>

The project was designed by Enrique Norten, the inventive Mexican architect whose profile has been on the rise in New York during the boom. His biggest project yet, it features a unique zig-zagging design that creates courtyards on two sides of the building, perched atop a Mercedes Benz dealership (hence the name). Mr. Abehsera said that open space was among the features that was helping to attract renters.

“We have a spectacular amenity program with 28,000 square feet of interior, contiguous space, with light and air and 60,000 square feet of outdoor space,” he boasted. “Within that interior space there’s weight lifting, boxing, yoga studios, an indoor pool, spin room, juice bar and all that. One of the outdoor decks had a lounge pool, which is pretty impressive. That’s actually a big role in the decision making of people moving out to the building.”

According to Streeteasy, rents start around $3,600 for a one-bedroom, $4,150 for a two bedroom. The entire first phase of the project, which hit the market in spring of last year, have been leased.

For those without the means to lease, check with the city, because there are 96 affordable units in the building, part of the inclusionary housing program. There are also condo units on the top 10 floors of the 32-story building, but it looks increasingly like those units will be rented, instead. “As we approach completion, around Thanksgiving time, our thinking would be probably to rent them,” Mr. Abehsera said.

Despite what seems like a challenging location, well, it’s not, according to Mr. Abehsera: “I think that going into the product, when we first came to market, we had no expectations, we had no real confidence in terms of what we would be getting. And what happened was a couple of things. We didn’t realize the built-in audience who works on 8th Avenue, 7th Avenue in the 50s, the financial firms, for them it’s a breeze in terms of walk to work. You also have a real audience concentrated in living on the waterfront, you know, spectacular views, you have the Hudson River Park. You’re only a very short walk to Columbus Circle, you’re a very short distance, also, to the Upper West Side, if you wanted to go that route. Or to Midtown or the Theater District.”

“I’m seeing, just from the people moving into the building, who we’re interacting with, it’s a real, dynamic, young New York market that’s just excited about living on the West Side,” he added.

Still, to further his efforts, Mr. Abehsera has hatched an ingenious plan to help the once dowdy area’s cache: he wants to extend West End Avenue all the way down to 42nd Street. He said the idea dawned on him once while walking to the project from the Upper West Side. Looking around at all the development going on, he believes it makes perfect sense.

“If you got to 58th and 11th Avenue, there’s no such thing, it’s 58th and West End Avenue,” Mr. Abeshsera said. “If this was called 53rd, 54th and West End, you’re talking about a very different building. There’s no reason why it shouldn’t be, between us, Silverstein, Related, Gotham West, and you have Durst, as well, with their project on 57th.”

“People don’t realize it yet, but this is the place to be.” 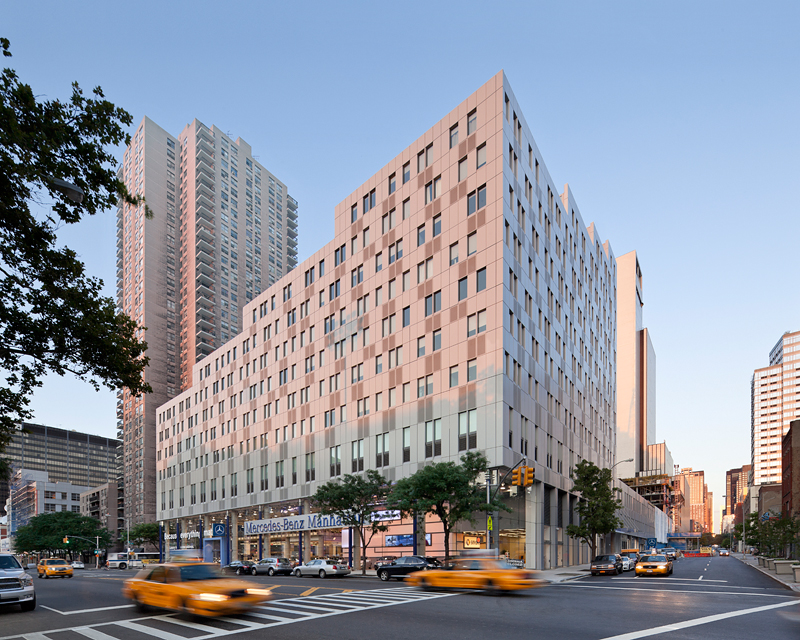