Last Thursday, Betabeat joined a crowd of about 40 entrepreneurs at the New York Sports Tech Meetup. The group had gathered at the New York Times building in Midtown where the view from Goodwin Proctor’s office on the 26th floor offered a glimpse of Ellis Island as the sunset reflected across the Hudson River.

The meetup, which has been held monthly since February, is run by Homefield founder Joe Yevoli, who left Shelby.tv of TechStars fame to pursue the team’s original–sportier!–concept, as well as Dave Blake, VP of product sales at Stainless Code (a company that helps advertisers run campaigns targeted to real-time events in sports games).

The meetup, which was sponsored by Goodwin Proctor, Stainless Code, and USA Today Sports Media Group, featured just one company: Gate F, a mobile sports app that lets users check-in to bars during a game, chat with friends, and compete for rewards such as tickets to see your favorite team play.

Only two of Gate F’s five cofounders were present: David Woodley and Chrissie Lamond. However, the team also includes Tom Plunkett, longtime CTO of Gawker Media and cofounder of SuperGlued, Christopher Aurigemma, cofounder and product lead of RSportz, and some dude named Matt, who they swear is a VP of something somewhere, but doesn’t want to reveal his true identity just yet.

We tracked down Mr. Woodley and Ms. Lamond over pepperoni pizza and beer before the demo got underway. Mr. Woodley, who quit his job at Big Lead Sports eight months ago to focus on Gate F, called himself a displaced sports fan who wanted to create a space to aggregate all his friends to talk about a game, simultaneously, no matter where they were watching the game.

Ms. Lamond, Gawker’s former creative services manager who is currently cofounder and manager of a digital ad agency The Luv, walked us through the user experience. “There are two mechanisms: you pick your game and you pick your place and then get into a chat room,” she said.

“The chat room is really just about the game that you are watching,” Ms. Lamond added. “So I can be anywhere in the country and talking with my brother in Peru or my sister in California. For every action you take, checking into the app, going in a chat room, you can get points. By accumulating points on the app you make your way to rewards.”

Gate F has partnered with several agencies to provide rewards to its customers including PrimeSport, a ticketing agency similar to StubHub, which provides gift certificates, free shipping, and free tickets to a user’s favorite team. Professor Thom’s, a popular East Village sports bar, will offer different specials depending on the date and time. And Fan Feedr, a content partner, will provide custom news feeds about different teams to Gate F users. Currently the app allows you to create chat rooms and win tickets for games in all the major league sports as well as college football and basketball.

During the presentation, we sat next to Will Flaherty, the director of communications at SeatGeek. General consensus from the audience seemed to be that Gate F had a useful product for sports fans, but needed critical mass to really take off. Following Gate F’s presentation, Robert Steir, managing director of Mindforce Consulting, asked the founders some pointed questions. “It’s a chicken and the egg,” he said. “They have to find a lot of people beyond their friends. It’s nice to have the product. Is it a must to have? I don’t know.”

After the presentation, Gate F also revealed that they will also let users you to create “Watch Parties.” Mr. Woodley explained that he loves watching games with his friends, but it’s often hard to get people together. “If there is a game Saturday, I can aggregate a bunch of friends to meet at my house or at a local bar and send all the information through the app,” he said. That feature will work by letting users pre-check-in to a game before it starts and see where your friends are going to watch instead of having to text all of them.

Between the Foursquare-like check-ins, chat rooms reminiscent of Google+ hangouts, the news aggregation feature, party planning element, and rewards disseminator, we wondered if Gate F wasn’t spreading itself too thin.

The startup is completely bootstrapped and the founders are currently not seeking funding.

Gate F also faces stiff competition from both location-based apps as well as sports-specific offerings. Their biggest competitors include Yahoo! Sportacular, a mobile app that lets you pick games and chat with other sports fans, and Playup, an Australian iOS app similar to Gate F that filters by sports, friends, and hangouts. Playup raised $50 million back in 2010 and launched on Android in April. In contrast, Gate F currently has 250 beta users and plans on launching on in the Apple App Store this Friday.

“If I’m being honest,” Mr. Yevoli told us afterward, “I like the idea behind Gate F and the team, but they lack focus. They are trying to nail baseball, football, college. It’s a hot space, but in location (checking into places) there are a lot of competitors.” 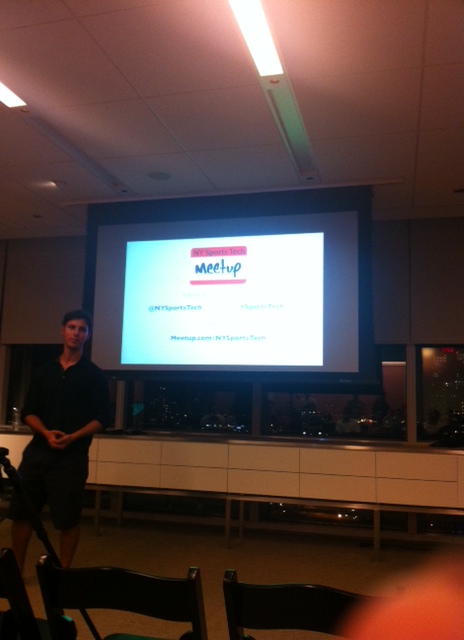