In light of the three recent public shootings involving the New York Police Department—including the most recent one at the Empire State Building, where the majority of the injured were hit by bullets that came from NYPD guns—New Yorkers may be curious about the level of proficiency our city’s “finest” have when it comes to firing guns in the middle of the most populous city in America. Enter a Reddit “Ask Me Anything” thread, this time featuring a six-year veteran of the city’s police force, answering questions about our cops and the guns they carry on their belts.

Reddit user “Mebbeatroaway” took to the message board late last night to answer questions that have “cropped up due to last weeks [sic] shooting.”

Needless to say, he’s got some pretty interesting things to say about Guns and The City. Emphasis ours …

Born and raised here, doing what I always wanted, but the politics is terrible. I don’t think I could leave, all my family is here and despite what everyone sees, it’s real easy to fall in love with NY. Hopefully something will change when our mayor leaves.

On the NYPD’s Gun Training Regimen:

Any average CCW [concealed-carry weapon] citizen who practices more then twice a year pretty much has most of the department beat in terms of training.

On NYPD Bureaucrats Changing the Gun Training Regimen Due to Public Complaints:

I honestly don’t think they will listen. Change has to come from within the department. Maybe a PC [police chief] more interested in tactics then sending detectives to New Jersey and middle America to hunt ‘terrorist’ college clubs.

On Whether Anyone Pushes for Changes in the NYPD Training Regimen:

There are many that do, and they are ignored, because a majority don’t care. Certain ‘tactics’ sessions we have involve bullshitting about deferred compensation or who went on disability. It’s fucking disgusting. But anyone that speaks up is considered a ‘buff.’

‘WHOA EASY THERE COWBOY. First let’s look at some slides a chief in Queens made about preteens joining gangs, then take an hour break and come back and sit down playing on your iPhones some more’

To be fair, a lot of the people ‘training’ us are cops who have back problems from wearing gunbelts for too long & never exercising so they stuck them in some crap teaching gig. It’s despicable.

On What Cops Make, and Whether or Not He Loves His Job:

Here’s the thing, I honestly don’t know. [The salaries] are all posted online … All I know is I’m making around 70 this year and I’m six years in. I went in the academy at 21 because that’s all I’ve ever wanted to do. I’d shovel shit for pay and do this for free if I had too. I don’t love this job because of the shit training, but because I actually love dealing with people out there that might need my help. Living in the boroughs is expensive, but I make enough to be happy.

The majority of the NYPD has never been trained on any of the M4’s, MP5’s or Ithaca shotguns we have. The last four academy classes were allowed to shoot 5 rounds each from an M4, and now they are all ‘rifle qualified’. When I ever get an AR [assault rifle], it will be my own.

There’s more where that came from.

If the thread and the user in question are in fact legitimate—and they certainly seem to be—at the very least, it’s an enlightening and refreshing change of pace from the constant obfuscation of matters like these that typically emerges from the department (in the form of NYPD spokesman DCPI Deputy Commissioner Paul Browne). In other words, savor what little is there. What most New Yorkers know about their police force and the way they deal with guns is likely cloudy at best, and despite the slight light this may shed on the matter, there likely won’t be more where this came from.

Or as the supposed cop in question, “Mebbeatroaway”—who hasn’t provided verification that he is an NYPD officer—put it: “My job has a zero tolerance policy on officers making it look bad online.” 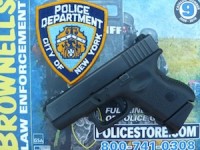