You know, come to think of it, it has been a while since we thought to ourselves, “Wow, those Occupy kids are kind of crazy.” And not like, Zombie March crazy, or even over-zealous hippie crazy. We’re talking full-on “proving The New York Post right about the mentally ill overtaking Zuccotti Park” kind of crazy.

Maybe it’s because, almost one year after OWS became a media sensation, the news cycle has moved on to bigger stories, like the upcoming presidential election, or how sad Robert Pattinson is feeling today. But just because they aren’t as visible doesn’t mean that members of Occupy have disappeared, or given up the fight and gone home to their parents’ houses to try to look for a job. A small(er) but vocal minority are still out there, railing against perceived injustices by the establishment against the 99 percent, in any form that might take. Like, say, the American Psychiatric Association. On October 6, a group called Occupy Psychiatry will march from the U.N. to Seventh and 53rd in protest of the AMA, which is holding a conference in New York. This Occupy group is not concerned about the lack of health care in America, like some of their brethren, but about forced medical treatment. According to a linked petition to the Royal College of Psychiatrists, these protesters seek to abolish guidebooks like the ICD and DSM, because psychiatric diagnoses impose “Western beliefs about mental distress on other cultures” (among other things).

Freedom from Forced Treatment and Abuse in the Mental Health System!

Every day, people young and old are forced into harmful treatment that they don’t want and that they don’t need. Join The Center of Human Rights of Users and Survivors of Psychology, Mindfreedom Int’l, PsychRights, Members of the Icarus Project (Tagline: “Navigating the Space Between Brilliance and Madness”), The Opal Project, and the petition site We the People, and more to rally for human rights in mental health treatment, policy, and culture!

While we don’t doubt that there is often misdiagnosis and over-medication in the field of psychology due to Big Pharma and a lack of consistent health care coverage in this country, the Occupy Psychiatry group seems to be cut from a different cloth than the original Occupy idealists. (Though since the whole point of OWS was that anyone with a grievance toward America could join in, we guess it’s not a conflict of interest.) This seems less about expressing frustration over the country’s increasingly disenfranchised middle class–in fact, the petition claims that poorer countries have fewer reported instances of mental illness, which … let’s not get into the logic behind that one–as it is about discrediting hundreds of years of psychology and pharmacology as a colonialist tool of oppression.

We’re loath to admit it, but we kind of miss the days when these protests were more abstract in their marches against like, the banks … or whatever. 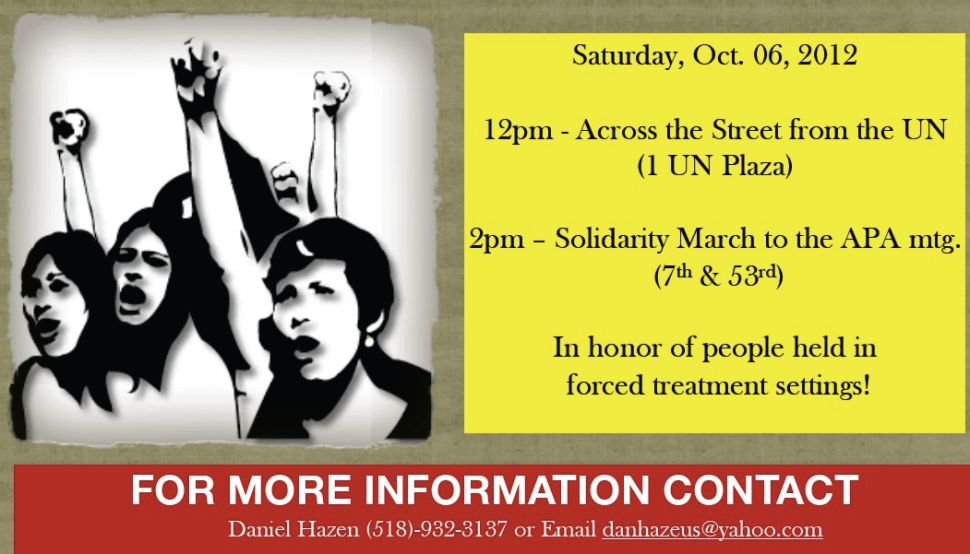