September 17 is the anniversary of the Occupy Wall Street protests, but it is also Rosh Hashana, the Jewish New Year, a day when observant Jews are supposed to go to temple and refrain from a whole host of activities. Because these religious obligations might prevent Jews from participating in the protests planned for the Occupy-iversary, a group called Occupy Judaism is planning an Occupy Rosh Hashana service in Zuccotti Park on September 16. According to the Facebook invite for the event, Occupy Rosh Hashana will include, “a potluck dinner,” a “nondenominational holiday service” with “Occupy Torah” and, of course, the requisite apples and honey.

“Using Jewish holidays as a way of calling for social and economic justice is in line with what the prophets envisioned, as far as what an act in the service of God is,” Occupy Judaism founder Dan Sieradski explained to Politicker. “God wants you to pursue justice, not to talk about it in a book, to go out and pursue it.”

Last year, Occupy Judaism hosted a Yom Kippur service that attracted hundreds of people to Zuccotti Park. Mr. Sieradski said the Occupy services are organized so that attendees do not have to violate any of the religious laws, which include prohibitions on carrying things during a holiday.

“They’re not required to bring anything with them, there’s no violation of a biblical precept that they will have to commit in order to participate,” said Mr. Sieradski.

In spite of this, Occupy Rosh Hashana is taking place on the 16th, the eve of Rosh Hashana and the Occupy-iversary, because Mr. Sieradski thinks some highly observant Jews might not be comfortable attending services in Zuccotti on the day istelf.

Though he has planned Occupy Rosh Hashana to accommodate Jews who might not feel kosher protesting on September 17, based on his interpretation of religious law, Mr. Sieradski believes they shouldn’t be reluctant to join the day of action.

“If they’re participating in a protest, it’s questionable whether they’re breaking any Jewish laws,” Mr. Sieradski said. “There’s nothing saying that you can’t march and shout.” 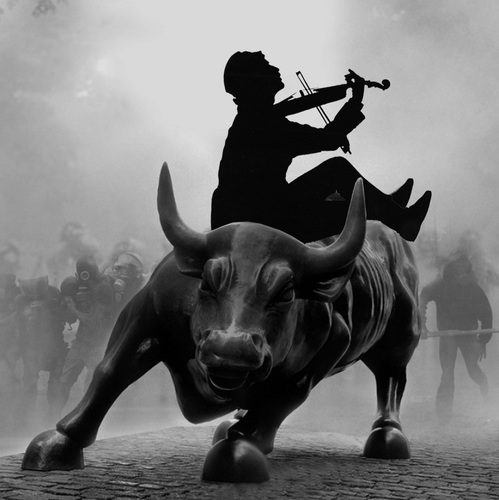