During his time at Miami University in Ohio, Mitt Romney’s newly-minted running mate, Paul Ryan, was a member of the Gamma Upsilon chapter of the Delta Tau Delta fraternity. Joseph Gorman, the sergeant at arms of Miami’s Delta Tau Delta chapter, spoke to The Politicker about how the fraternity’s current members are reacting to the news of Mr. Ryan’s selection.

Mr. Gorman also said the Delta Tau Delta brothers are expecting Mr. Ryan to visit their frat house, which is known as “The Shelter,” sometime soon.

“I hear that he may come back very soon since he’s been chosen for this.” said Mr. Gorman.

Last night, when the early reports of Mr. Ryan’s selection came out, Mr. Gorman said the brothers of Delta Tau Delta discussed the news together on Twitter. Though Mr. Gorman characterized the fraternity as including members with a wide array of political views, he said they’re all excited to see an alum on a presidential ticket.

“I think we’re decently diverse,” Mr. Gorman said. “But all of us are certainly excited for his candidacy. I am certainly a supporter of him.”

According to Mr. Gorman, Delta Tau Delta and Mr. Ryan both share a “very Midwest character.” He also said the frat has a very strong reputation on Miami’s campus.

“We have a very great reputation and I don’t think that there’s any sort of negative outlook on us at all,” said Mr. Gorman.

We asked Mr. Gorman whether Delta Tau Delta lore contained any tales of Mr. Ryan engaging in any legendary pranks or particularly epic partying. He said he wasn’t aware of any wild fraternity stories in the candidate’s past. 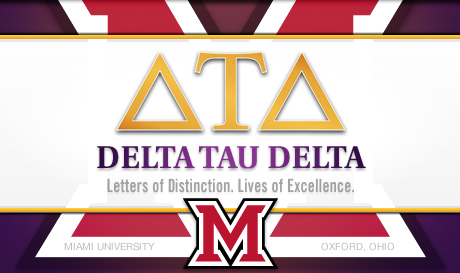