Up for re-election next year, the GOP governor with approval ratings over 50% appears to be in a commanding position against a fractured party.

Sources say his most credible challenger, Newark Mayor Cory Booker, is likely not to oppose him.

As always, money trumps talent, and part of politics is mental preparation for a final upward move denied, as one must yield to an unknown or untested entity with a bigger bank account – and political ambition.

Such a name does not appear on the list below. Keep in mind that just such a name – much as Jon Corzine’s did a decade ago – could suddenly emerge and change the complexion of the 2013 election.

At present, a wide field abides.  Note some lesser known politicos mixed into the list who already are stirring ripples of protest from larger sized public figures who say they have greater stature to at least be included in a statewide conversation.

But the more miniature functionaries of party politics find a home here because Christie has created an atmosphere of self-doubt among many more potent Democrats who feel the Republican is in a good position to win.

Moreover, some of those listed below appear only because they find themselves in a tenuous re-election position and must either move up or move out.

Pluses: He has the biggest fundraising capacity among Democratic Party prospects, the most potently transmitted charisma brand via television, twitter and the web, and literally ran into a burning building to save one of his residents.

Negatives: He leads a city that depends on state dollars, which hampers his ability to get tough with Christie and convincingly sell real contrast points. Insiders close to the Newark mayor say he’s more suited for the Senate than another executive role, but his friends also worry that he could get bored roaming the halls of the U.S. Senate with the likes of John Kerry and Orrin Hatch. Bottom line: few believe he would actually run against Christie, in part because they share key financial backing.

Pluses: He nearly got struck by lightning while doing a television interview and barely flinched; building trades laborers see the ironworker as one of their own; he has proved a smart and deft political player in Trenton.

Negatives: Like Booker, he’s joined at the hip to Christie. The fact that he didn’t get a college degree could haunt him when the education-obsessed state gives him a thorough going-over.

Pluses: The Al Smith of New Jersey possesses considerable political skills, a credible executive record as acting governor and, much like Irish rock band U2, a gift for self-reanimation.

Negatives: His longevity in politics makes him a fatter target for the GOP. He essentially drags 40 years of public policy up to any podium in a debate forum. He’s also actively at war with South Jersey Democrats, which means he wouldn’t only be fighting Christie to become governor.

Pluses: A gutsy counterpoint to Christie, the senator from Middlesex County could energize public unions, women and the progressive wing of the party. Unlike others hemming and hawing or bewildered by Christie, she appears to legitimately have a hunger for the job.

Negatives: At present she lacks good, solid relations with the machines that run the Democratic Party in New Jersey. She could be vulnerable to a Christie attack if the incumbent chooses to call into question her executive experience.

Pluses: Good fundraising ability relative to most of his peers and detailed knowledge of the budget. Quick on his feet and from a political family, he is a natural political animal.

Negatives: He’s not well-liked by other politicians either jealous of his good looks or badgered by what they perceive to be a Greenwald ego too big for the Legislature.

Pluses: The head of the federal Environmental Protection Agency enjoys national stature and – according to party buzz – has the attention of the Democratic National Committee, who want her to challenge Christie.

Negatives: No one knows her except a handful of enviros and Corzine stragglers.

Pluses: The tavern owner from Camden commanded universal respect as speaker of the General Assembly. A generation of young comers – including Assemblyman Troy Singleton – point to him as their inspiration for sticking with politics. His understated style belies a steel trap intellect which could throw the normally brash Christie into self-protection mode.

Pluses: He always has a dedicated cadre of allies talking up his statewide candidacy. Progressives love the congressman from Long Branch, who proved an able lawyerly foil to Christie on the issue of deferred prosecution agreements during Jon Corzine’s doomed 2009 run for re-election.

Negatives: At this point, Pallone appears to be more a creature of Washington than Trenton, and might not want to shift from the genteel climes of the U.S. Capitol to the dank hallways on the Delaware.

Pluses: As chair of the party, he has shown an eagerness to take on Chris Christie, and is capable of delivering punchy sound bites to back up his talent for dissecting policy.

Negatives: He ran afoul of South Jersey during the debate over higher education reorganization, a collision that might not have been politically fatal, but which will certainly test the state party chairman’s recuperative powers.

Pluses: The mayor of Elizabeth has enjoyed success as chief executive of the dock front Union County city and shows a happily aggressive willingness to challenge Christie.

Negatives: Unless his pal state Sen. Ray Lesniak (D-20) can cut a deal with Norcross and Essex County Executive Joe DiVincenzo, Bollwage would have to fight his way through the progressive wing of the party to take on an establishment-backed candidate in the primary. That is, unless Lesniak can cut a deal with Codey and Buono.

Pluses: The Essex County pillar of white haired Irish Democratic Party gravitas has enthusiastic supporters among public unions who would love to see the veteran take a two-fisted run at Christie.

Negatives: Giblin’s public bearing at times suggests Cuchulain’s fight with the sea more than back-slapping eagerness for public contact. Giblin’s political future hinges on what happens in the 34th District, where a wounded state Sen. Nia Gill (D-34) may not find the county line next year, a circumstance that could propel Giblin into his own senate candidacy.

Pluses: The mayor of Bayonne has strong personal ties to Codey and a compelling storyline. When was the last time a gubernatorial candidate wrestled a rifle away from a gunman holding a hostage?

Negatives: As chairman of the Hudson County Democratic Organization (HCDO), Smith has struggled to energize a grey and flagging outfit, and managed to royally tick off U.S. Sen. Bob Menendez (D-NJ) during what should have been an innocuous party pen stroke regarding a sliver of the 10th District that falls within Hudson County.

Pluses: Sources close to the U.S. Senator say it won’t happen. He loves being a senator. But he also doesn’t have to give up that job to take on his nemesis Christie. The financially well-connected Menendez in this cycle is trying to prove he can put a dismally fractured party on his own back. If he does that, will his ego require him to break out of his comfort zone and run against Christie?

Pluses: Son of the late beloved Gov. Richard J. Hughes, the Mercer County executive impresses people with his mixture of humility and humanity.

Negatives: He’s from Mercer, a politically insignificant county as long as it lacks substantial alliances. Like others on this list – Smith, Giblin, and O’Donnell among them – Hughes enjoys close ties to Codey and wouldn’t run with Codey in the race.

Pluses: The Somerset County Democrat has strong fundraising ties and, with his campaign this year against Leonard Lance, shows a fire in his belly to move up.

Negatives: He’s a Democrat from Somerset County whose coffers will be depleted after this year’s run.

Negatives: The candidate he backed for Monmouth County chairman lost in a matchup with Vin Gopal.

Pluses: Against an incumbent Republican governor who strives to be a Springsteen hero, O’Donnell, as a career firefighter from Bayonne, could credibly amp up the engines and bandana imagery for the Democrats.

Negatives: Like his friend, Mayor Mark Smith, the populist Democratic Assemblyman faces organizational challenges. While his closeness to Codey and Assemblyman Joe Cryan (D-20) could pay political dividends in certain political theaters of operations, those connections could also make him a marked man to Team Norcross.

Pluses: She possesses a statewide platform as speaker of the Assembly and enjoys machine and grassroots support in Essex County.

Negatives: Her chief ally, powerful Essex County Exeutive Joe DiVincenzo, is as close as a Democrat gets to the Republican governor. If Oliver were to summon resolve for a statewide run, she would likely have to go rogue. She has not shown any public interest in the position.

Pluses: He’s not just liked, he’s well liked. Even those who suffer what they feel is the galley slave confinement of the Norcross era acknowledge the South Jersey Assemblyman’s talent. In a cutthroat business fraught with injured egos and tortured, seething personalities, the Paulsboro pol manages to create an oft unfound public calling card: goodwill.

Negatives: It’s difficult to picture Burzichelli maneuvering out of South Jersey around Sweeney, Greenwald or Roberts, at least in the next cycle. He’s a team player who doesn’t maneuver, in fact, except with the port or starboard shifts of the organizational vessel at large.

Negatives: He’s tried twice to get out of South Jersey but failed in runs for governor and senator.

Pluses: Don’t let the professorial profile fool you. The guy’s a born campaigner, sharp-elbowed when he needs to be and seemingly ravenous for the kinds of political collisions that have characterized his rise to power and re-election contests.

Negatives: Outside of liberal cocktail conversations in Hunterdon and Somerset there’s no buzz around a Holt candidacy.

Pluses: Now a resident of New Jersey, the former Congresssman from Rhode Island – married and settled down in Atlantic County – has matured into a genuinely likeable public figure.

Negative: When he left Congress he appeared genuinely worn out by it all.

Pluses: The cool Seton Hall Law professor and former statewide director for the Obama campaign has the potential to animate progressive voters.

Pluses: Never visibly ruffled or unsettled, the senator from Bergen County routed his opponent in last year’s election, proving his ability to actually give voice to intelligent discourse in a political environment always threatening to crumble utterly into wise-guy lingo.

Negatives: He appears to have no designs on Drumthwacket at present. Maybe that’s because his wife is a key fundraiser for Christie, one reader points out.

Pluses: He just ran the greatest New Jersey campaign of all time in defeating Steve Rothman.

Negatives: Age. Ten years ago – and you hear this all the time talking to Democrats who love the Paterson congressman – he would have been the perfect candidate to run against Christie.

Negatives: He’s a clerk, who’s still probably a move away from a platform for a gubernatorial run.

Negatives: His career as an elected official is still in its infancy. 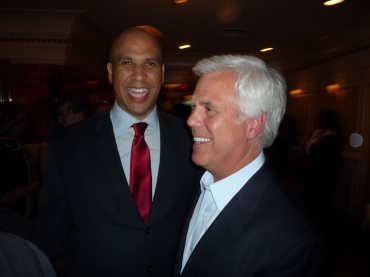