ST. PETE’S’ BEACH – Polishing his national nimbus, Gov. Chris Christie pumped up the California delegation this morning at the neighboring Trade Winds, regaling the crowd with a story that hit the right Republican notes: love for the U.S. Marine Corps, jeers for Barbara Streisand.

“Excuse me, Ms. Streisand, you’re in Gov. Christie’s seats,” Christie delightedly recalled of his attendance at a White House concert where staff attempted to eradicate the liberal songstress and her husband to make way for the assigned Christie and his wife.

“All during the concert, Barbra Streisand was glaring at me, and I thought, another badge of honor for a Republican,” declared the governor to receptive hand claps and wolf whistles.

He later went for the jugular on President Barack Obama.

“We have had enough of Chicago ward politics in the Oval Office,” the New Jerseyan said.

“He will likely go down as the education governor, who has fundamentally taken on the teachers’ unions, to make sure every child will have a great education,” said Meg Whitman, who played the damsel in distress to Christie’s aggressive intervener at a town hall event two weeks before she lost her 2010 bid for governor of California.

A beaming Whitman recalled, “Chris Christie’s security detail is moving in, Chris comes across the stage and confronts the guy, he said, ‘You just stop. We’re trying to do things for America. And I was just thrilled to death.”

A whoop went up from the California crowd followed by the opening Springsteen strains of “Badlands.”

“When you got a bully in the room you can either sidle up next to him, or punch him in the face first,” said Christie, who panned Whitman’s conqueror, sitting Gov. Jerry Brown.

“I’ve got to sit next to this guy at the National Governor’s Association meetings?” wondered a bewildered Christie as boos rained.

“We have to reassert our national role,” said Christie, welcoming himself in that role. “I have an 11 billion dollar budget deficit and they said all you can do is raise taxes. …We did in New Jersey, we’ve got to do it in California.”

The governor bragged that he balanced his budgets without hiking taxes, a strategy critics grouse simply shifted the burden to local governments.

The weather hounded the building but Christie was the force in the room, soaking up applause line after applause line, a big one when he mentioned how he was the first governor in America who introduced Romney for President.

The earlier image of Christie confidant Bill Palatucci bounding through a sideways slicing rain, fighting to keep his hood down against the wind, convinced PolitickerNJ.com to forego rain gear and rough it to the nearby Trade Winds to hear Gov. Chris Christie’s speech to the California delegation.

It proved a mistake.

A drenched and disoriented reporter staggered in full view of Christie’s handlers milling outside the Winds, and barely made it in outside of the wind.

But it was but a small brush with Isaac, that lurking little Hurricane presence at all the events down here that newscasters continually promise won’t give St. Petersburg its brunt.

Inside the Trade WInds, Californians were in full bore party mode at eight in the morning, in expectation of Christie.

A platoon of red-shirted press handlers in vain tried to steer reporters onto a single strand at the back of the room, behind the cheerful Republican delegation packed in front of a sufficiently large and noble-looking staircase fitted with a Romney/Ryan sign where Christie appeared. 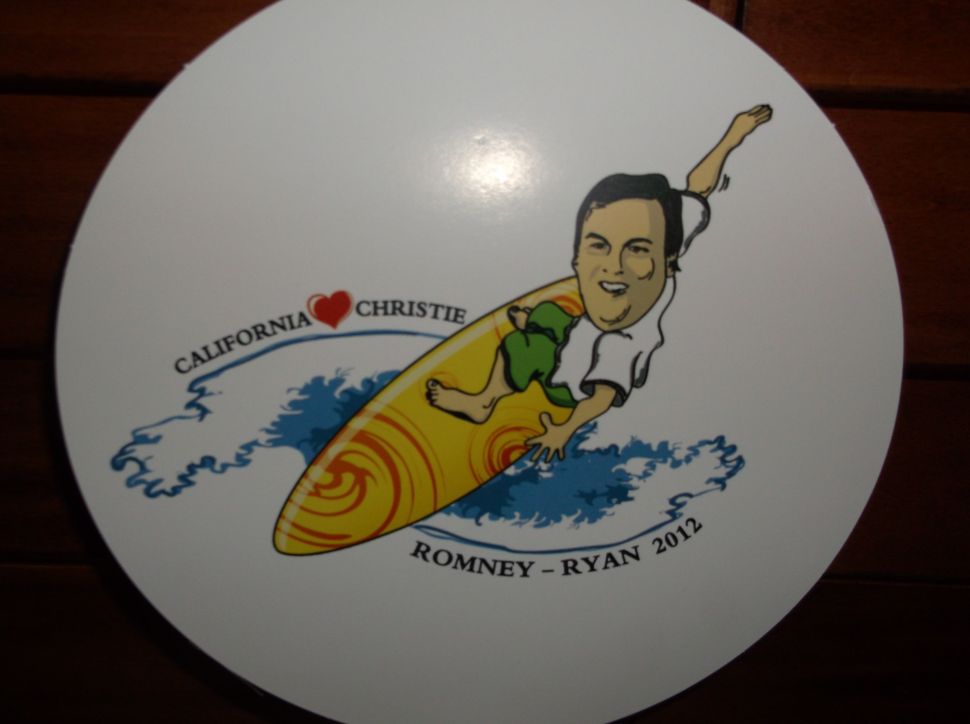