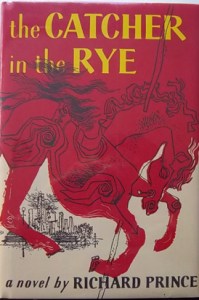 “To describe them as bookstores — which they are, in the narrowest technical sense — would be a little like describing ‘On the Road’ as a guide to traveling America by automobile.”

He visits Karma Books, Specific Object, Printed Matter and Fulton Ryder, an appointment only shop on the Upper East Side–the location of which Mr. Kennedy is told he must keep secret, though the store’s owner “has been an open secret for months — Fulton Ryder is a nom de plume of the artist and prominent book collector Richard Prince.”

Mr. Prince, a book collector himself, has also printed copies of the Catcher in the Rye that claim the book is “a novel by Richard Prince.”