TAMPA, FL — To hear the horde of reporters that have descended on Tampa tell it, the Republican National Convention is a treacherous landscape with the threat of a massive hurricane, machete wielding anarchists, roving bands of Scientologists, nymphomaniac strippers and death metal. The political press corps, in their endless search for intriguing narratives, is often prone to exaggeration and groupthink, but since American Airlines waylaid your humble Politicker correspondent for nearly eighteen hours, thus far, we have only been able to get a sense of the reality inside the RNC security perimeter through leadup coverage and dispatches from other reporters warning of a potentially chaotic powder keg of protests and severe weather that left us wondering just how bad of a situation the GOP has gotten us all into out here.

Due to the storm, today’s convention events were postponed in favor of a brief ten-minute session featuring an invocation and the unveiling of a massive “debt clock” by RNC chairman Reince Priebus. Over the weekend, the Washington chattering classes Washington and early Tampa arrivals seemed to have concluded Mr. Priebus’ predecessor, Michael Steele, erred badly in selecting a coastal venue in Florida during hurricane season.

GOP leadership has maintained they’re confident the weather and protesters won’t prevent them from spending four days focusing on their message and party platform. Indeed, tropical storm Isaac seems to have spared Tampa in favor of the Gulf Coast and, at the moment, apart from sporadic tropical downpours, the weather seems unlikely to do serious damage to the city. The storm threat also may have dampened the planned protests and an intense security presence enforcing an almost comically thorough list of banned items inside the security perimeter encompassing all the key RNC venues is dedicated to keeping aspiring rabble rousers at bay.

Once the convention begins in earnest, we may all find that it was a fairly standard affair where big money donors, operatives and elected officials are able to mingle and articulate the Republican Party platform without incident. However, whatever the end result, since most American voters will barely be able to watch the conventions and the press corps has spent the last few days painting the RNC as a chaotic, bungled affair, the damage may already be done and the Republicans and their candidate, Mitt Romney, may find the attention paid to the chaos and intrigue surrounding the convention’s start may overshadow the four day branding bonanza they hoped to enjoy with their Tampa field trip. Whatever happens, we’re headed into the hot zone in Downtown Tampa to see what unfolds. 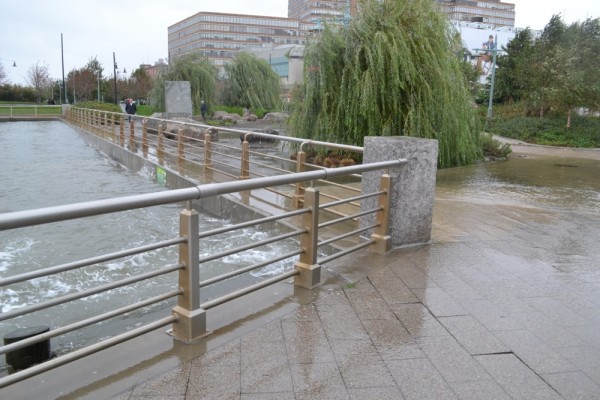