As the Republican National Convention begins in Tampa, New Jersey voters give President Barack Obama a 14-point lead over former Mass. Gov. Mitt Romney, according to a new Rutgers-Eagleton Poll. Among likely voters polled just before the GOP convention, 51 percent say they would vote for Obama while 37 percent support Romney. Another 6 percent prefer someone else, and 5 percent are not sure.

Obama holds his lead despite the fact that a majority of likely voters (57 percent) thinks the country is on the wrong track; 36 percent say it is going in the right direction. The key for Obama is that voters are much more positive about him personally: 54 percent hold a favorable impression while 39 percent view him unfavorably. Voters dislike Romney – only 38 percent view him favorably, while 49 percent are unfavorable.

Easily the most important issue in the election is the economy and jobs, named by 62 percent of likely voters. The president leads Romney as the candidate who can best address this issue. The federal budget deficit is a distant second at 10 percent, followed by Social Security and Medicare at 8 percent. Voters see Obama as better able to handle the economy by 46 percent to 42 percent, but Romney has a strong edge on the budget, 68 percent to 12 percent. Obama is favored on Social Security and Medicare, 73 percent to 14 percent.

Voters’ most important candidate quality is leadership (29 percent), followed by “shares my values” (18 percent) and “cares about people like me” (17 percent). Voters who care most about leadership say they will vote for Romney over Obama, 54 percent to 34 percent. But Obama wins on values, 49 percent to 39 percent, and overwhelms Romney on caring, 82 to 13 percent.

“The president leads in New Jersey primarily because of his personal qualities,” said David Redlawsk, director of the Rutgers-Eagleton Poll and professor of political science at Rutgers University. “Voters like him better and feel he shares their values and cares about them. While Romney keeps it closer on the hard issue of the economy, and wins easily on leadership, voters generally prefer to support someone they like over someone they don’t.”

Results are from a poll of 916 registered New Jersey voters conducted with both landline and cell phone households Aug. 23-25; 710 respondents are identified as likely voters and are the focus of this release. The likely voter sample has a margin of error of +/- 3.5 percentage points.

Obama’s 14-point lead is built on support from women, who prefer the incumbent by a 58 percent to 32 percent margin. Men give Obama a very slight edge, 45 percent to 42 percent. Independents are also in Obama’s camp, 44 percent to 36 percent. The president does better among Democrats, (93 percent support him) than Romney does among Republicans (83 percent support).

Catholics (by four percentage points) and white voters (eight percentage points) are among the few demographic groups to favor the Republican. Romney’s support among whites is completely offset by nonwhite voters who overwhelmingly prefer Obama and comprise a quarter of the electorate. Romney also holds a very slight lead among likely voters making more than $100,000. Regionally, voters in the shore and exurban counties of New Jersey are Romney supporters; he holds an 18-point lead in the former. Urban, suburban, and south Jersey voters are equally strong for Obama, however. Young voters remain with Obama as they were in 2008: 58 percent of those under 35 say they will vote for Obama, while 26 percent support Romney.

“As long as women here are overwhelming supporters of Obama, Romney has little chance of winning,” said Redlawsk. “While he does OK among men, and very well among white men, this is not enough of a base in a state as diverse as this one.”

Likely voters are generally positive about Obama personally, while negative about Romney. Much of this is driven by independents, who like the Democrat (49 percent favorable) more than they do Romney (36 percent favorable). But Romney suffers within his own party in comparison to Obama; 94 percent of Democrats like Obama, just 78 percent of Republicans have a favorable impression of Romney. Few Democrats (4 percent) dislike Obama, but 12 percent of Republicans are unfavorable toward their nominee, while another 10 percent are neutral.

“As Election Day approaches, Obama’s margin in New Jersey will be readily traceable to how positive women feel about him, more than anything else,” Redlawsk said.

Wealthier voters are much more likely to feel positive about Romney compared to those with lower incomes, although he still trails Obama in favorability at all income levels.

U.S. on wrong track; Voters prefer Obama on the economy

By a 21-point margin, the state’s likely voters think America is on the wrong track. At the same time, they say Obama would do a better job fixing their strongest concern, the economy. Two-thirds of Democrats believe things are going in the right direction, but only 27 percent of independents and 10 percent of Republicans agree. Voters with household incomes under $50,000 comprise the only group with a positive outlook, as 43 percent say the country is going in the right direction while 40 percent disagree. By a 2-to-1 margin, voters at all other income levels are convinced things are on the wrong track.

Nearly two-thirds (62 percent) of likely voters name the economy as their most important issue in the election. Among these, 46 percent say Obama is the right candidate to handle the issue, while 42 percent say Romney would do the better job. When it comes to the election, however, voters who care most about the economy give the president a 51 percent to 40 percent edge.

More voters (29 percent) say “strong leader” is the quality they want most in a presidential candidate; among these voters Romney is preferred 54 percent to 34 percent. But the next two qualities – “shares my values” (18 percent) and “cares about me” (17 percent) clearly play into Obama’s strengths, as voters who want those qualities strongly support Obama. These voters eliminate any advantage Romney has on leadership.

“The right direction-wrong track numbers, especially among independents, would normally point to a clear opportunity for a challenge to a sitting president,” said Redlawsk. “Yet Obama seems immune to these numbers here in New Jersey. Garden State voters may or may not be pinning the blame for the economy on him, but they still think the president will do a better job than Romney. That, coupled with his likeability and the fact that this remains a Democratic state, suggests New Jersey is squarely in his corner.” 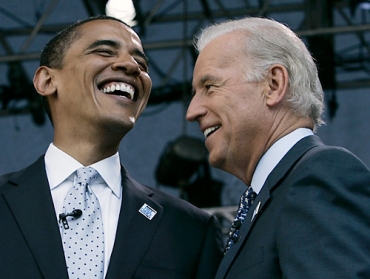