Last weekend, Michelle Obama made a surprise visit to a hospital in Aurora, Colorado to meet with victims of last month’s movie theater shooting there. Her husband, President Barack Obama, also met with those affected by the horrific shooting just two days after it occurred. However, neither the president nor the First Lady has visited Oak Creek, Wisconsin where six people were killed at a Sikh Temple sixteen days after the incident in Aurora. Amardeep Kaleka, whose father was killed at Oak Creek, said he finds it “strange” his community hasn’t received more support from President Obama and Mitt Romney.

“Why wouldn’t they, at some point, make a stand. Make a stand for everybody out there who’s ever been robbed, or gunned down or has faced this hatred,” Mr. Kaleka said.

Mr. Kaleka’s father, Satwant Singh Kaleka, was president of the Sikh Temple of Wisconsin. According to Mr. Kaleka, his father was shot eight times and lost all of his fingernails while wrestling with the gunman. Mr. Kaleka said he and other family members of the victims haven’t received any communication from President Obama beyond a single call to a “random” member of the congregation.

“We communicated with the White House very briefly, mostly the Department of Justice, and that’s about it. There was a phone call made with Barack on the first day, on Sunday, to just a random congregation member,” said Mr. Kaleka. “Somehow, some way he got somebody’s number and he called a congregation member. He’s never called the victim’s families, not even the board that my father led before he died.”

In a White House press briefing two days after the shooting in Oak Creek White House Press Secretary Jay Carney was asked whether flags were at half mast to commemorate those who were killed and whether the president would be meeting with the victims.

“I have no calls or scheduling announcements, or schedule changes to announce to you at this time.  But the answer is yes with regards to the flags being lowered,” Mr. Carney said.

Mr. Kaleka believes there’s two main reasons why the Sikh community in Oak Creek hasn’t gotten the same kind of support from the president that the people of Aurora received–the tense political climate in Wisconsin and the fact Sikhs are a religious minority.

“First and foremost, I think it’s politics,” said Mr. Kaleka. “Wisconsin is an obviously pivotal state in most of these situations, especially presidential elections because we could swing either way. We have a big gun control issue here…and then we have the labor problem with…so, we have a lot of politics at play in our state and I wonder if that makes people want to stay away from speaking about this, or visiting us, or showing support.”

He also said many at the Sikh Temple of Wisconsin believe their status as a largely immigrant community and minority religion has kept politicians away.

“This is the way our community feels, and it’s sad, if this was a Christian church and it was a Sikh shooter, I’m pretty sure we’d have a different response if the same exact situation happened,” Mr. Kaleka said. “That’s pretty sad, because we’d have undeniable recourse and actions from the government, or at least a show of support. Here we barely have any support from the federal government or even the local government.”

Mr. Kaleka said he knows standing up for non-Christian minorities can have a “backlash,” but he thinks Sikhs’ status as a minority community makes it more important for President Obama to make a strong, visible show of support in Oak Creek.

“I think a personal visit is absolutely necessary. All politics aside, a personal visit, even with the victims’ families, the temple, the people, for him to take pictures with people who have turbans and beards on does so much for our safety,” said Mr. Kaleka. “Separation is what fuels this hate, or what fuels the violence against other people.”

As of this writing, the White House and the Obama campaign have not responded to a request for comment on this story. However, President Obama isn’t the only one who Mr. Kaleka would like to see visit Oak Park.

“I think it would be obviously beneficial if political parties, no matter which they are, even if Mitt Romney comes, it would help us unify,” Mr. Kaleka said. “At some point we have to unify on one ground against hatred and tyranny.”

Mr. Kaleka cited Wisconsin’s Republican governor, Scott Walker, as a politician who came to the homes of victims’ families and attended events responding to the Oak Creek shooting. Mr. Romney’s newly-minted running mate, Congressman Paul Ryan, is from nearby Janesville, Wisconsin. Mr. Kaleka said Mr. Ryan attended “multiple events” after the shooting but hasn’t met with the families of those who were killed. Both Mr. Ryan, who had not yet been named the vice presidential candidate, and Mr. Romney’s son, Tagg Romney, went to Oak Creek on Friday to attend a group wake for the dead and visitation services at the temple. However, Mr. Kaleka said he’d still like a visit from Mr. Romney himself. In fact, he was incredulous when we informed him Mr. Romney and his running mate were campaigning near Mr. Ryan’s hometown yesterday.

“That’s amazing. Dude, we’re not even like two hours away from that,” Mr. Kaleka said.

As of this writing, the Romney campaign has not responded to a request asking if Mr. Romney plans to visit Oak Creek. 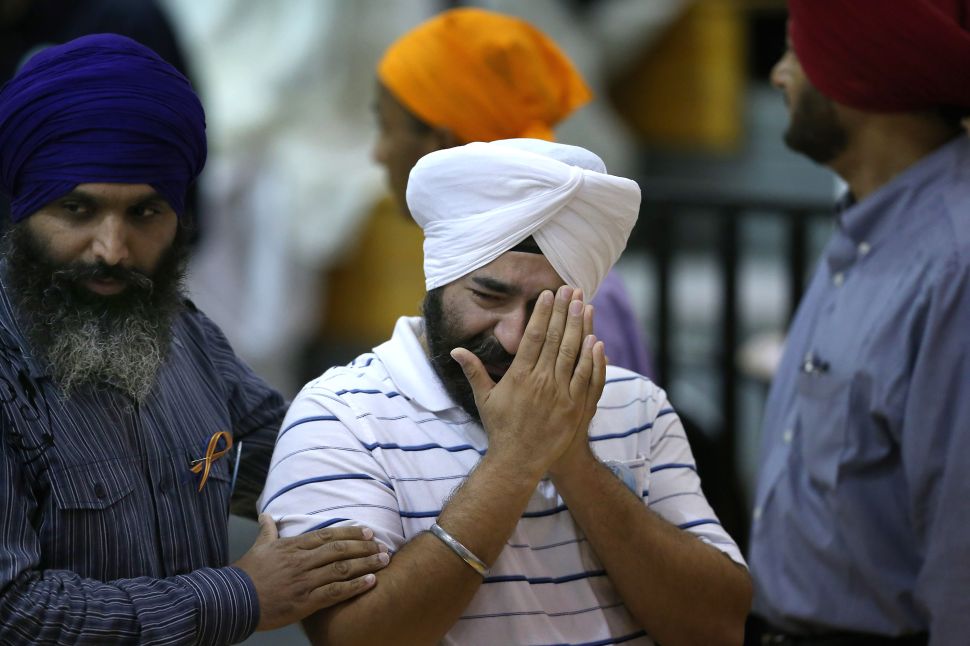