According to the NYPD, New York Times photographer Robert Stolarik “violently resisted” being arrested Saturday night and “inadvertently struck” an officer after he got too close to police who were dealing with another suspect. Mr. Stolarik and Times attorney George Freeman dispute this account and claim he was kicked and beaten by the police after simply attempting to do his job. After a long winter that was filled with clashes between New York City’s press and police at Occupy Wall Street, Mr. Freeman told The Politicker this incident shows the NYPD has failed on its promise not to interfere with those who cover the news on city streets. As for, Mr. Stolarik, he just wants to get his cameras and press pass back.

Mr. Stolarik was arrested at about half past ten on Saturday night while helping two Times reporters cover a story on Sheridan Avenue and East 167th Street in the Bronx. He told us they were “doing street interviews with people” for a story that involves “the neighborhood, and crime rate and things like this.” He declined to go into further detail since the assignment was for a “pending story.” When they heard an altercation in progress nearby, Mr. Stolarik said he crossed the street to get pictures of the police handling the situation.

“There were a decent amount of people in the street. I didn’t even see the actual fight, it seemed like there was tension. Cops showed up, I crossed the street. I went to go shoot it,” said Mr. Stolarik.

This is where the accounts of Mr. Stolarik and the NYPD begin to diverge. According to Mr. Stolarik, when he approached the scene the police grabbed his camera before pushing him to the ground.

“When I went to go shoot it, a cop grabbed my lens and shoved it down. I said, ‘Don’t touch my lens.’ Another cop came to her rescue, if that’s what we want to call it. He grabbed the camera, pushed it into my face. They both told me to ‘get the fuck out of there’ and I continued to shoot and asked for their badge numbers,” Mr. Stolarik said. “When I asked for their badge numbers, they turned violent, they surrounded me, they knocked me to the ground, dragged me while I was on the ground. There were like six or more….One of which was kicking me in the back. They were not cuffing me and taking a real long time stepping on my head.”

Inspector Kim Royster, a commanding officer in the NYPD’s public information division, said she “spoke to the arresting officer and the lieutenant on the scene, as well as the command’s executive officer who conducted an investigation” and received a far different version of events. Ms. Royster said the officers arrived on the corner after responding to a call reporting shots fired. When the police arrived, they determined the “call was unfounded,” but they encountered a woman who had been assaulted.

“The photographer was a foot away from a police officer who was attempting to make the arrest of a young woman who had assaulted the female victim, and who tried to flee. The young woman was resisting arrest and the officers were attempting to handcuff her,” Ms. Royster said. “There was a crowd control situation, about 100 onlookers at the scene. In the attempt to disperse the crowd, the photographer and other onlookers were given numerous lawful orders to move back. While the others in the group complied, Stolarik refused, in fact, he tried to get closer to the officers making the arrest.”

Once the woman was handcuffed, Ms. Royster said “the officer was inadvertently hit in the face, not resulting in an injury, by Stolarik’s camera.”

“Upon being struck in the face, the officer attempted to place Stolarik under arrest. He refused and violently resisted being handcuffed. An additional officer received a cut on his hand while attempting to subdue Stolarik,” Ms. Royster said.

Mr. Stolarik described the story that he was violently resisting arrest as, “the most absurd thing I’ve ever heard in my life.” He said the claim an officer was hit by his camera “is also an untruth.” He said he displayed his press credential and verbally identified himself as a member of the press. According to the Times‘ attorney, Mr. Freeman, Mr. Stolarik was a reasonable distance away from the officers and “the police didn’t want him taking their picture and there didn’t seem to be any reason for that other than to block photos of what the police were doing.”

“He was grabbed, he was hit, he was surrounded, he ended up on the ground, he was kicked and, frankly, injured, so any notion that he could be the instigator is artificial, is made up,” said Mr. Freeman. “The very notion of basically cursing at him to get away was unwarranted and, further, the notion that he was then surrounded, and cursed at and that physical contact was made of him by the police was totally unjustified.”

After his arrest, Ms. Royster said Mr. Stolarik was taken to the 44th Precinct.

“EMS responded to the precinct and he refused medical attention,” she said.

Mr. Stolarik said he went to the hospital following his release shortly before five on Sunday morning, which was about six hours after his arrest.

“I went to the hospital yesterday. I don’t have any broken bones, but I’m hurt,” he said. “I mean, I was beaten by grown men and I’m hurt.”

Mr. Stolarik, who was charged with obstructing government administration and resisting arrest, said having his camera equipment and press pass taken by the officers was worse than any physical pain he may have suffered.

“I’m a freelancer for the Times. I’ve been there over a decade–been there for 12 years and I don’t have cameras right now. I don’t have a press credential. This is how I make my living and it’s like I don’t have any of those things,” said Mr. Stolarik. “The police department has used this as their personal way to kind of take away my livelihood.”

Mr. Stolarik said he believes the Times’ lawyers are “trying to deal with” the situation with his cameras and credential, but as it stands, he will be unable to retrieve his equipment until his court date, which is November 26. He also believes the fact he was charged with anything “is ridiculous to begin with.”

“This is my living. This is how I survive and I did nothing wrong. All I did was try to do my job. It’s like, I show up to take pictures, do my job and the next thing I know, I have no equipment, no press credential,” Mr. Stolarik said.

Mr. Stolarik doesn’t know yet whether he’s going to pursue a civil lawsuit.

“My main concern at this moment is, I’d like to get my press credentials and my cameras back,” he said.

Mr. Freeman said he wrote a letter and email to the NYPD requesting the return of Mr. Stolarik’s equipment and credentials, but he has yet to receive a response.

Both Mr. Stolarik and Mr. Freeman played roles in the many conflicts that occurred between the NYPD and the media during the Occupy Wall Street protests last winter. Multiple reporters claimed they were arrested or otherwise prevented from covering the raid on the Occupy Wall Street encampment in November. Officials have since disputed those accounts. Due to the issues that arose during the clearing of the Occupy Wall Street, Mr. Freeman and other representatives of media outlets in the City requested a meeting with NYPD Commissioner Ray Kelly. Following that meeting, Commissioner Kelly sent a memo to his officers reminding them not to interfere with reporters covering news events. In December, footage of Mr. Stolarik being blocked by police officers while covering an Occupy Wall Street protest at the World Financial Center attracted a great deal of attention on the internet. Mr. Stolarik told the Village Voice it seemed like one of the cops in the clip “didn’t follow the departmental directive from Kelly.”

Despite the tensions last winter, back in March, Commissioner Kelly told The Politicker he believes the NYPD has “a good relationship with the press.” We asked Mr. Freeman whether he felt the latest incident with Mr. Stolarik showed the police have failed on the promises made to the representatives of media outlets who met with Mr. Kelly back in November. He quickly answered in the affirmative saying that, though he felt the press had “achieved an understanding with the brass,” Commissioner Kelly’s orders about respecting the media have seemingly gone unheeded.

“That, to me, is my main point,” Mr. Freeman said. “We’ve been working with the NYPD. I think we’ve achieved an understanding with the brass. Commissioner Kelly reissued his finest a message that made clear that photographers doing their jobs shouldn’t be interfered with or intimidated and that’s exactly what happened here.”

Mr. Stolarik was hesitant to say whether the overall relationship between the police and the press has improved.

“I don’t know….I think there are different times. Sometimes, it’s absolutely fantastic when you go to a scene, we’re able to all work together and say, ‘OK, you know, we’re going to stand here.’ Everyone tries to accomodate the other even though we have two different jobs to do,” said Mr. Stolarik. “Things like this, it was not that at all. It was an attack.” 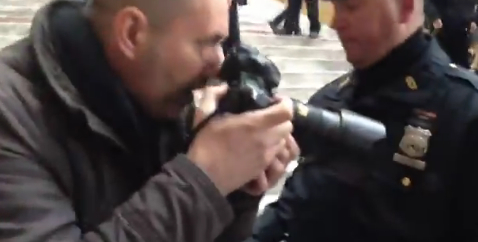