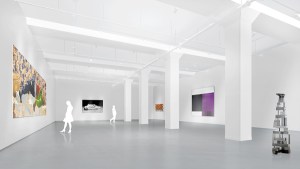 “Be careful where you step,” shouted Maureen Bray over a percussion of power tools as she maneuvered past the electricians, sheetrockers and HVAC crew members who have two months to transform a 22,000-square-foot construction zone into the new home of Sean Kelly Gallery, which is about to triple in size. “Obviously this giant hole won’t be here,” said Ms. Bray, a director at the gallery, pointing to what will become a stairwell leading to a black-box theater—just one of three exhibition spaces, alongside expanded offices, a “canyon”-sized library and two private viewing rooms (“back where those toilets are now”).

In the early 1990s, most real-estate-seeking New Yorkers overlooked the gray smudge on Manhattan’s West Side known as Chelsea, then still a wasteland of deserted freight tracks, turpentine fumes and auto-body garages. But for the throngs of art galleries being swiftly priced out of Soho by fashion boutiques and Dean & Delucas, it offered cavernous, column-free architecture at bargain-basement prices.

Matthew Marks pioneered the migration on an abandoned stretch of West 22nd Street. Soon after, Barbara Gladstone, Metro Pictures, Sean Kelly and hundreds of other galleries followed, and a “new Soho” was born in Chelsea.

Twenty years, two Gagosian Galleries and a Comme des Garçons later, Chelsea art dealers are fretting that the legacy of Soho has come back to haunt them. About a third of the neighborhood’s galleries have been shuttered in the last five years as High Line-inflated real estate prices and an influx of deep-pocketed fashion and design firms have forced out many of the smaller dealers. At its height, Chelsea was home to more than 350 galleries; today only 204 remain, according to Rice & Associates real estate adviser Earl Bateman.

But it would be premature to pronounce the world’s premier gallery district dead. In fact, business appears to be better than ever for a few galleries—and it’s not hard to guess which ones. This fall and the months following, Friedrich Petzel, Sean Kelly, David Zwirner, The Pace Gallery and Hauser & Wirth, are set to engulf the West Side with a wave of new galleramas: stadium-scale exhibition centers with square footage stretching into the tens of thousands and calendars filled with blockbuster exhibitions.

This is the new Chelsea gallery scene—where competition has gone beyond survival of the fittest and evolved into a full-fledged superspecies. Even in the digital age, when business can increasingly be done online—and the art-fair era, when a large proportion of selling is done on a whistle-stop tour of the fairs that have sprung up around the world—an expansionist few insist that not only do brick-and-mortar galleries still matter, but that bigger is better.

“It has to do with some of our artists, and that the nature of what they are doing requires larger spaces,” said Marc Payot, vice president of Hauser & Wirth, which is opening its second New York location in the 23,000-square-foot former Roxy NYC roller disco at 511 West 18th Street.

There, visitors are likely to see more of Roni Horn’s big glass blocks and cylinders, Paul McCarthy’s towering sculptures and Dieter Roth’s “very large” installation-sculpture hybrids, 8 to 10 of which are tentatively slated to christen the new gallery. “This simply could not be shown in a small place,” Mr. Payot said of the show. “We want to be able to show an artist’s full range.” 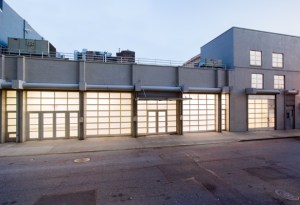 Friedrich Petzel, who is doubling the size of his current home with a second gallery just down the block from the new Hauser & Wirth, echoed this sentiment. “The artists are the ones in command of this,” he said. Vivid natural lighting and an exclusive location were two concerns that Mr. Petzel had been hearing from his artists, so he signed a 10-year lease on a gallery with a full-roof skylight and a comparatively desolate locale, 456 West 18th Street.

“The artists like the idea of not having too many neighbors. It’s not a shopping mall; it’s about them and their work,” he said.

Or take this summer’s very public stealing of Thaddeus Ropac’s thunder. The Paris dealer had announced that Anselm Kiefer would inaugurate the opening of his second gallery in that city this October. Six weeks later, he was hit with the news that Gagosian Gallery had decided that it would open its new Paris space, also this fall, with its own exhibition of works by Kiefer. (Adding insult to injury, Kiefer called Gagosian’s space “so inspiring you can envision the artworks in it immediately.”)

“The good galleries are having trouble keeping their artists unless they can offer them a global platform or a space that’s magnificent,” said art adviser Wendy Cromwell.

Over at Pace, communications director Andrea Glimcher has figured out a way to up the gallery’s architectural impact without adding a fifth New York outpost. Instead, Pace is moving its 22nd Street gallery—whose current building will soon become home to the Dia Foundation’s Manhattan branch—into a new 4,000-square-foot building at 508 West 25th Street, directly adjacent to its existing gallery.

“What’s great is that it’s next door and allows us to use it as a single gallery or to connect the two spaces into something larger,” Ms. Glimcher said. Together, the spaces consolidate into a single, 8,000-square-foot gallery. The first show, however, an exhibition of new works by Lucas Samaras opening Sept. 27, is being held in the single new gallery.

Some observers have attributed this fall’s mega-gallery boom to a bifurcation of the market that favors its very highest and lowest ends. “There’s so much money pointing to the very top end, where you have the wealthy looking to hedge against inflation. It’s always risky to expand your business, but I think these are calculated bets that the market will support multiple platforms,” said Ms. Cromwell.  “These are big brands trading on their reputations to a certain degree.”

Indeed, “brand” is at times a better descriptor than “gallery” these days. It used to be that only a global conglomerate like Sotheby’s or Christie’s had the resources for large-scale secondary-market business, such as the liquidation of a major private collection or estate.

But in 2008, Gagosian Gallery challenged this model by purchasing Ileana Sonnabend’s collection of Andy Warhols for $200 million. That same year, David Zwirner, along with Iwan Wirth, purchased 155 postwar works from the collection of Helga and Walther Lauffs. The price was never disclosed, but Sotheby’s reaped $96 million for selling just 33 works from the trove.

It has been suggested that Mr. Zwirner’s success in selling off the Lauffs collection helped him land the coveted Donald Judd estate in 2010. That year, with his secondary-market business booming—and with 40 contemporary artists crowding his roster—he purchased an $8 million parking garage at 537 West 20th Street to become the site of his fourth gallery in Chelsea. Architect Annabelle Selldorf designed a new five-story, 30,000-square-foot building—the first LEED-certified gallery in New York—expected to open late this November with an exhibition by Judd and Dan Flavin. 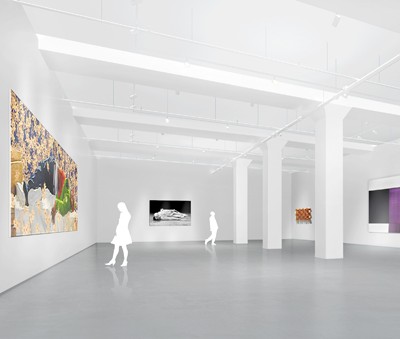