Abortion has come back to the forefront of the political race after Missouri Congressman Todd Akin, who is currently running for a Senate seat, made a very stupid remark about women not getting pregnant in cases of “legitimate rape.”

The damage is done: Republicans are treating Akin like a leper; he’s been asked not to attend the RNC and to drop out of the race by no less than Mitt Romney and Paul Ryan, and it’s doubtful his campaign will ever recover from this gaffe.

And while it’s good that Todd Akin’s comments have gotten people talking about an issue that has been mainly pushed aside this election, some of the outraged responses to the Congressman’s statement are in (almost) as poor taste as the original remark. Here’s how we shouldn’t be talking about the issue of “legitimate rape.”

1. Making jokes about rape
We know you think you’re helping by pointing out the insanity of someone telling you that you haven’t been violated because you didn’t get pregnant, but adding in lines like “magical rape-identifying uterus,” as in the confusingly-titled “Have I Been Legitimately Raped?” (turns out it wasn’t a quiz, like we originally thought) makes you sound flippant and snarky. Which is just fodder for the people who do believe nonconsensual sex isn’t rape, because why would someone who claimed to have gone through the experience be making jokes about it?

Exception: While joking about rape is never funny, satirizing the logic behind people like Daniel Tosh and Congressman Akin can be. It’s a slight but crucial distinction, and not recommended unless you are positive you know the difference. For examples of how to do this correctly, check out Lindy West’s Jezebel piece, “How to Make a Rape Joke,” this Onion headline, and Taylor Ferrera’s “Legitimate Rape” song.

2. Automatically assuming that this is the moment to come out with a first-person confessional about being the victim of rape
We don’t mean you shouldn’t EVER write about your experience. Just don’t write about your deeply personal trauma just to prove that Todd Akin is an idiot. We already know his remarks were out of line, and the deluge of “I was raped” stories in response undermines the horror of the act itself, increases the power/attention of a guy running for senator, and adds very little to the conversation.

3. Being an asshole to other media outlets over issues that are only marginally related to the rape comment
See the ouroboros-like media feud between Newsweek’s Tumblr, The Huffington Post and comedian Rob Delaney over a photo of a coat-hanger HuffPost used to accompany the Akin story. Way to turn attention away from the actual problem, people. And miss the point entirely.

4. Trash-talking an empty chair and pretending like that is totally what you’d say to Todd Akin if he had, in fact, showed up on your news show.

Is this really the time for ridiculous stunt journalism? Though we all know how effective it is to reduce a serious national debate about abortion and rape to petty name-calling. Come on, what would Will McAvoy do?

5. Being Paul Ryan
While the Republican VP candidate adamantly doesn’t support what Rep. Akin said, he also doesn’t want to get into “rape semantics.” Isn’t the entire problem that someone people think the problem with rape is the word choice?

“Rape is rape,” said the man who once tried to parse the difference between regular rape (no federally subsided abortion) and “forcible rape” (possibly subsided abortion, but you have to prove it). Now that Mr. Ryan has changed his tune and all rapes are actual rapes, he can denounce Akin without anyone noticing that under this logic, no abortions would be subsidized by the government because forcible rape doesn’t exist anymore. 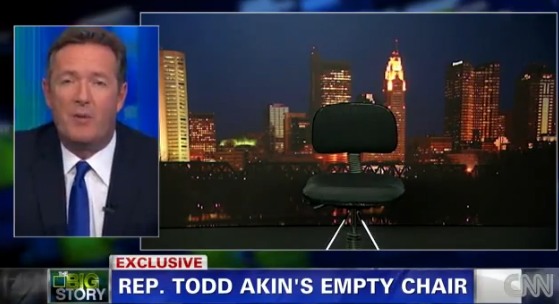