Never underestimate the power of internet shaming! Not five days after New York comedian Matt Fisher recounted the tragic story of his sister’s fatal car accident and her auto insurance company that went so far as to intervene on behalf of the defendant in court to avoid paying out the premium on her policy, Progressive has agreed to pony up the entire amount due to the Fisher family.

According to a statement on Progressive’s website yesterday, the insurance company was obligated to see the case go to trial against Ronald Kevin Hope III, whose car collided with Ms. Fisher’s in 2010, in order to prove that the driver was at fault.

Under Maryland law, in order to receive the benefits of an underinsured driver claim, the other driver must be at fault. Sometimes this can be proven without the need for a trial, but in Ms. Fisher’s case, there were credible conflicting eyewitness accounts as to who was at fault so they could pay out the premium.

A trial was necessary so that a jury could review all of the evidence and come to a decision. In those circumstances, under Maryland law, the insurance company providing the Underinsured Motorist coverage is considered a defendant. As a defendant in this case, Progressive participated in the trial procedures on our own behalf while Nationwide represented the other driver.

On Thursday, August 9, a jury determined that the other driver was at fault in the accident involving Ms. Fisher. In accordance with that decision, Progressive worked with the Fisher family and their legal representative to resolve the claim.

Of course, the “due process” argument doesn’t really hold up when you look at the court documents of the case, which clearly show that Progressive was working to prove that Mr. Hope was not at fault in the accident:

It is this 19th day of May, 2011, by the Circuit Court For Baltimore City, hereby ORDERED
1. That Progressive Advance Insurance Company be and is hereby allowed to intervene as a party Defendant.

2. That Progressive Insurance Company is GRANTED all rights to participate in this proceeding as if it were an original party to this case.

Or why Progressive sought a motion in limine to discredit the one witness to the accident by casting her as suffering from a brain injury. (A motion that was denied by the judge.)

In other news, all those tasteless robo-tweets from the auto insurance company  have been deleted from its account and reverted back to its pre-PR-nightmare post: “Sunday yardwork-inspired poll: fresh corn or fresh tomatoes?” 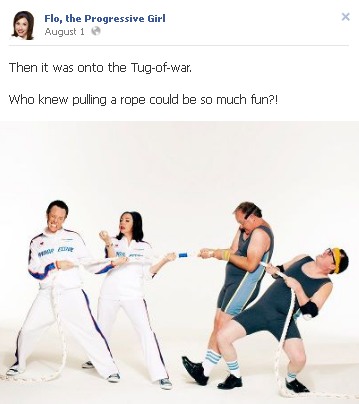