Sand castles, once the seaside-entertainment province of tots, are now, finally, courtesy of Creative Time, a valid pursuit for fine artists of all ages. Last Friday, the freewheeling nonprofit held its inaugural Sand Castle Competition at Rockaway Beach, and 13 teams were given two and a half hours to vie for the top prize: a gold shovel, a bucket of booze and a $500 gift certificate to Grey Area.

If nothing else, it proved a terrific opportunity to see Visionaire magazine editor Cecilia Dean buried to the neck in a block of sand. Wearing black sunglasses, she managed to look fabulous. Elsewhere, things were more awkward. Artforum.com editor David Velasco, also buried in sand, had a complaint: his leg was twitching. “Twitching is wonderful,” artist Ryan McNamara said in defense of his castle. “I could never do that!” Creative Time’s director, Anne Pasternak, marveled. “I’d be so claustrophobic.”

Kenya Robinson had dug a hole and was weaving herself and two other women into a net made of white string for a sand castle titled Female Prostate. Asked to explain her process, she said, “I like holes and string.” Good enough for Walter Robinson, former Artnet magazine editor and one of the competition’s judges, who was wandering around in a white lifeguard tank top. What was he looking for? “Girls in bikinis.” He gestured toward the castle of Ms. Robinson (no relation). “They have three.”

Meanwhile, Tom Sachs, who has apparently had enough of outer space, was busy going in the opposite direction, digging what he described as a hole to China. A motorized pump had been requisitioned for the removal of , but it wasn’t enough. “Bucket brigade! Bucket brigade!” the artist called out, leaping from the hole, and his team clustered around the pump, tossing and soggy sand onto a growing mound. There was a loud pop, and the pump’s motor stopped; the team looked concerned. “That could collapse at any moment,” a woman said, nervously looking at the hole.

“Forty-five minutes, artists, and then shovels down!” Ms. Pasternak shouted into a megaphone, channeling Iron Chef.

But her order didn’t apply to clippers. Over at Dustin Yellin’s sand castle, called Bowl-cuts, a professional hairdresser hired to give free haircuts went on snipping away next to a make-shift bowling alley. “I thought it would be fun to get my split ends lopped off inside a sand castle,” said a woman visiting from Florida.

As the sun began to set, bathing Rockaway in dramatic light, Creative Time’s chief curator, Nato Thompson, led the judges, as well as a crowd of onlookers, in a final round of inspection. “We’ve got performativity,” he said into a loudspeaker as the group approached a sphinx-like sculpture by Lauren Wasserson and Amit Greenberg, who had turned their buckets upside-down to form an impromptu drum circle.

But best in show went to Jen Catron and Paul Outlaw’s human fountain, a series of platforms on which people sat and spat streams of . The artists wore gold-rimmed shades and American flag bathing suits and blasted hip-hop from a boombox. (“A girl in a bikini and a crew of he-men,” was Walter Robinson’s assessment.) “They’re just spitting,” said Mr. Thompson. “Give it up for this fountain of delight!”

By the time his group arrived at Mr. McNamara’s castle, the models, including Mr. Velasco, had broken free of their mounds, leaving them in crumbling disarray. “A raw shell of performativity,” Mr. Thompson mused. The next day, it would all be gone. 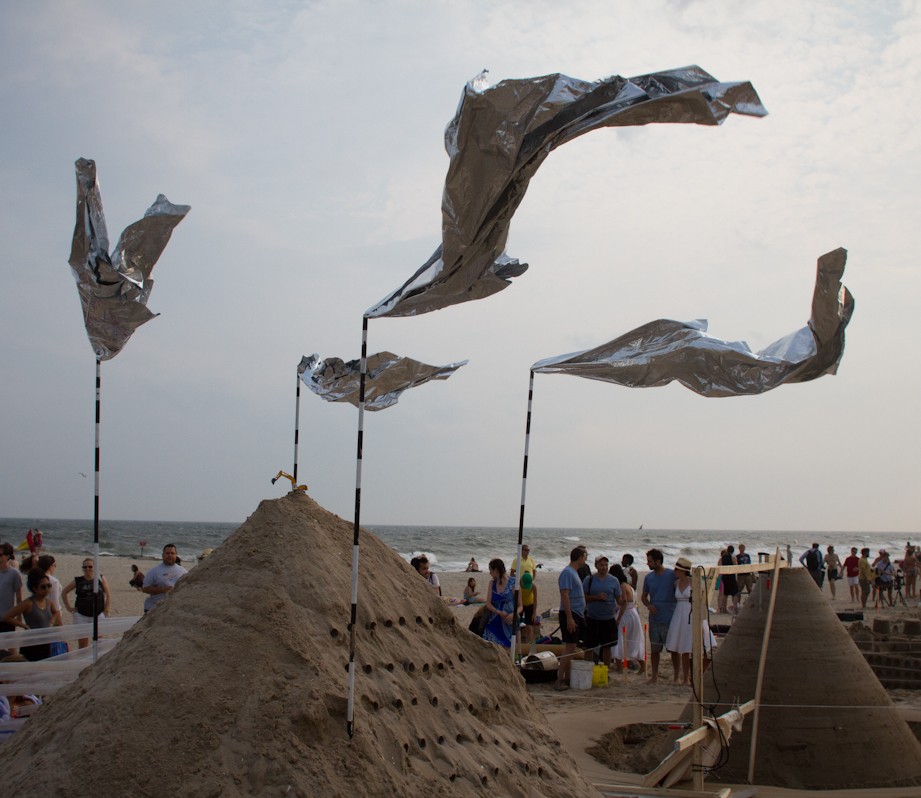