The media has picked up the torch of New York comedian Matt Fisher, whose family has been battling Progressive Insurance since his sister was killed in a car crash in 2010. According to Mr. Fisher’s Tumblr posting, his sister’s insurance company actually got its lawyer to defend the driver at fault for the accident, just so it wouldn’t have to pay out her policy to the grieving family.

Yesterday, Progressive responded by auto-tweeting this statement to people who wrote about Progressive on Twitter: Mr. Fisher, whose family has retained a publicist after his story garnered so much attention, volleyed back with his own “statement” … an update on his original Tumblr post:

At the beginning of the trial on Monday, August 6th, an attorney identified himself as Jeffrey R. Moffat and stated that he worked for Progressive Advanced Insurance Company. He then sat next to the defendant. During the trial, both in and out of the courtroom, he conferred with the defendant. He gave an opening statement to the jury, in which he proposed the idea that the defendant should not be found negligent in the case. He cross-examined the plaintiff’s witnesses. On direct examination, he questioned all of the defense’s witnesses. He made objections on behalf of the defendant, and he was a party to the argument of all of the objections heard in the case. After all of the witnesses had been called, he stood before the jury and gave a closing argument, in which he argued that my sister was responsible for the accident that killed her, and that the jury should not decide that the defendant was negligent.

I am comfortable characterizing this as a legal defense.

Progressive sent out an email Tuesday, essentially rehashing their robo-tweet statement and adding that Nationwide Insurance paid for the defendant’s counsel. The next day they amended that statement. According to the Huffington Post, Progressive confirmed that it retained legal counsel for the trial:

A Progressive rep on Wednesday confirmed to HuffPost that an attorney for Progressive was providing counsel in the trial. However, the rep added, the attorney represented only Progressive, not the defendant. Progressive provided no evidence, he said, but was looking after its interests in the liability aspect of the case.

And let the court documents show that Progressive was given the ability to act as if it was defendant in the case, and to intervene on their part:

It is this 19th day of May, 2011, by the Circuit Court For Baltimore City, hereby ORDERED

1. That Progressive Advance Insurance Company be and is hereby allowed to intervene as a party Defendant.

2. That Progressive Insurance Company is GRANTED all rights to participate in this proceeding as if it were an original party to this case.

In addition, the judge ruled in favor of the plaintiffs, and ordered Ronald Kevin Hope, III and Progressive Advanced Insurance to pay out in the amount of $760,000.00.

The Fisher family has yet to see that money. 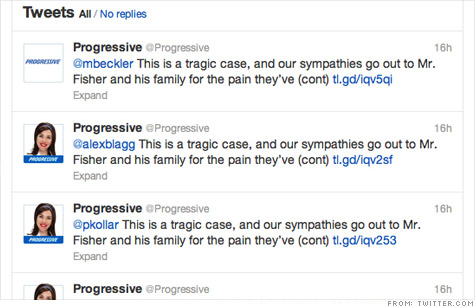