And they said it couldn’t be done: a sustainable model for making money from videos that last longer than it takes for an adorable cat to try to climb out of a box. Hell, even sites that incorporate short video content have trouble making money off the endeavor, because advertisers still have a hard time figuring out how much one viewer’s time is worth.

So who would have guessed that it would be Vice–formerly the home of Canadian junkies who specialized in stories about drugs, sex and how cool they were–that finally broke the code, hitting $110 million in revenue for 2011. And this year, its going to make even more.

In an interview with a British journalism site, Dan’l Hewitt, general manager of Vice’s advertising division (AdVice), explained how the 30-plus stations now branded under Vice actually turned a profit. Mainly, it was by realizing that original content wasn’t going to pay for itself with the usual advertising model:

The commercial models around the creation of unique, original video content still don’t work. If you think about our ability to be able to go to somewhere like Liberia and film a documentary on child genocide and warlords, if we were able to produce that at a cost of less than $50,000, which is incredibly cheap for a 40-minute, hard-hitting documentary, to realise any kind of return on that we would need to be able to deliver more than three million video streams based on current video ad models.

The other model for making money from online videos is branded content, but Mr. Hewitt eschewed that as well:

“We work with brands to create legitimate content that talks to their consumers and their audience in the most appropriate way,” Hewitt explained. “We don’t think about branded content, we think about telling stories and making content that relates to brand messages or products.”

That being said, Vice still has commercials before most of its shorter videos, (though not the longer stuff), so it hasn’t been able to completely game the system with its “Fuck you, pay me” model of ad revenue. 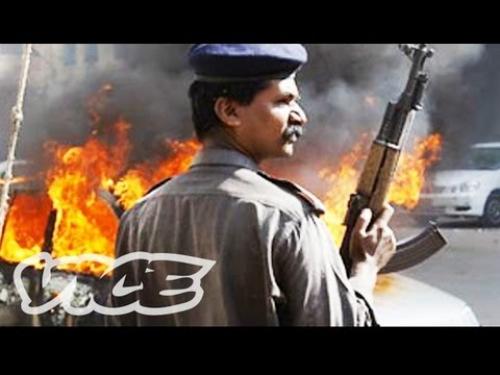