Two writers are having some crazy Twitter back-and-forth that is ostensibly interesting for its relatively flamboyant qualities, but doesn’t seem particularly worth understanding. On the other hand, there’s very little else happening today. In your Wednesday Evening Media Briefs, we will do our best to avoid covering it:

Village Voice Out of the Village Voice Building: Looks like those rumors we previously heard were, in fact, correct: The Village Voice will be moving out of the Village Voice Building at 36 Cooper Square, where it has been since 1992. The Grace Church School will be moving in its place. Voice editor in chief Tony Ortega told The Local: “Thankfully we’ll be leaving this dump in the spring, and we’ll be taking the letters on the outside of the building with us.” For what it’s worth, when this writer worked at the Voice, he found that building to have its charms, certainly more than the “dump” designation would merit. But different strokes, etc. [NYT/The Local]

Mazel Pogue: New York Times technology columnist David Pogue is engaged to his technology publicist girlfriend (now fiancée), which happened via the magic of technology (Vimeo). To be fair, his kids thought of it, and it’s supposedly adorable, but just remember that Mr. Pogue is a living standards exemption to ethics in tech journalism, which is more often than not a casualty of the entire enterprise of tech journalism to begin with. [PR Newser]

Regarding the Deployment of Bloomberg BusinessWeek’s Sloppy Seconds, and Thirds: The Atlantic is running a cover of Barack Obama and Mitt Romney bruising each other, which New York magazine already did, and which Bloomberg BusinessWeek already spiked. Take a guess who produced the best one.  [Yahoo! News]

Vanity Flair: Vanity Fair blogger extraordinaire Juli Weiner has graciously given the world a peek into the inner workings of Graydon Carter’s media mecca. Academics, Fake Jeff Jarvis, futurists and Jay Rosen, take note: Journalism 9.0 is on the horizon, and so are those with the skills to create it. Get with the times.  [@juliweiner]

Fair Use? The Sun couldn’t rip off TMZ’s photo of Prince Harry hanging out in Vegas, playing “strip pool,” so it did the next best thing and found a staffer named Harry to pose naked on the cover to recreate the photo. If you’re an editor, here’s your next great idea. If you’re not, sorry for giving your editor her next great idea. [@suttonnick]

Radar 4.0 Possibly Still a Ways Off: Either three-time Radar editor Maer Roshan’s Twitter got hacked, or he’s filling out surveys on Facebook for money, and not nearly enough of it. [@MaerRoshan]

GQ Tebowing on Tebow Fans: New York Jets quarterback Tim Tebow recently caught some flack for a Jesus-like pose in the magazine he didn’t think would go in the rag, which goes to tell you how little his handlers know about magazines. Either way, GQ has taken to making fun of Tebow’s fans/their own haters, now, and it is funny, and savvy. They are doing everything correctly here, and any social media expert who argues otherwise should be summarily deleted from this planet. [@GQMagazine]

We, the Bane of Akin (Bakin?) Embattled “legitimate” U.S. Senate candidate Todd Akin: “The media is against us.” First of all, he should note that when he’s referring to this industry conspiratorially, we are capital-M “The Media.” Second: We’re “against” him like we’re “against” a room full of cash (or the riches that One Of The Dumbest Ad-Libs In The History of American Politics can provide) while we have empty pockets. [via @KBAnderson]

The Most Important Thing Published Today That Nobody Will Read: The Neiman Journalism Lab published a piece about how landing-page traffic is going away, not that many media organizations have it to begin with. You know who was ahead of this curve by a long shot? And you know what site has, for most of its very prominent rise, always had consistently solid landing-page traffic? Welcome to the reasoning behind the Gawker redesign that everybody still hates. Nick Denton wins again. Look at a New York Times, a New York Post, or even a New York Observer story you’ve been driven directly toward. Your options for what you can click on from there are limited: You can move to other verticals, related stories, Outbrain stories or maybe the top-trafficked stories, which you may or may not have interest in. Get linked to a Gawker story? There’s the infinite river of news, to the right of every story. Fact: This doesn’t make the Gawker redesign any less irritating, and commenters remain eternally stupid.  [Neiman Journalism Lab]

And we have managed to get through a media roundup without having to get into the aforementioned Twitter beef, helpfully summarized by Fake George Gurley here. Please make tomorrow easier and feed us your stunning media tips, your stunningly insipid media gossip, your stunningly creative media hair tips and your stunningly scandalous media nachos orders. 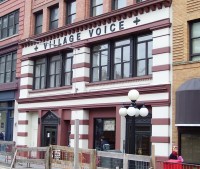