Flood (center) with Dan Colen and Cameron Diaz, at the opening of “The Hateful Years.” (Courtesy Mary Barone)

Mark Flood’s new show at Chelsea’s Zach Feuer Gallery, which opens Aug. 28, has the not-so-subtle title “Artstar.” It overlaps with “The Hateful Years,” Mark Flood’s solo exhibition currently on view at the Upper East Side gallery Luxembourg & Dayan. The Feuer show has one of the more sarcastic press releases we’ve seen in a while, which is based on a real press release sent out by a real museum for a show that opened in 2011 (can you guess which one?):

“The show will include large, obnoxious text panels, a pile of vintage Life magazines and a series of grisaille non-floral lace paintings intended to terminate the lace painting project. The show also features Work of Art, a poetic examination of the Bravo series of the same name, the first video by Flood intended to be seen in an art gallery instead of on Youtube…This is the last museum-like exhibition devoted to the full scope of the non-career of Mark Flood, occasionally considered to be among the least important artists of the 20th century.”

At the end, prospective visitors are told to visit http://www.starbucks.com/ for more information.

Courtesy of the gallery, we’re happy to share with you this equally sarcastic promotional music video, which contains the below lyrics, faux-rapped over a simple looped beat of an operatic voice singing, “art /star”:

“Written on a napkin, signed in blood,
Carved in stone till the day I am a dud:
I made a little deal with the Devil, y’all,
Back when I was just a trickle,
Before I became a Flood.”

In the video, note the horrifying footage of a snake biting a foot. 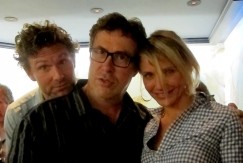