Former Ku Klux Klan Grand Wizard David Duke may hate the Jews, but he sure loved his dog, Torri. When the seventeen-year-old, all-white (naturally!) Maltese died a few months back, Mr. Duke did what any of us would do after the loss of a beloved pet–he filmed a nearly fifteen minute video tribute to the dog and uploaded it to YouTube complete with an emotional folk soundtrack, photos of Torri exploring the great outdoors and musings on the nature of life, death and grief.

Mr. Duke initially made his “Tribute to Torri” private, but he has since relaxed the clip’s privacy settings at “the urging of those who met Torri over the last 17 years.” We’re so glad Mr. Duke chose to share his video, because it’s all kinds of incredible. Despite how amazing this video it is, it somehow seems to have escaped the attention of the internet, so we present it to you now.

“It’s been two weeks since Torri died….It still hurts,” Mr. Duke explains as the video begins. “Grief actually can be quite wonderful. It heals the soul and it’s such a tribute to the spirit that has passed on….I want to express my heart while these feelings flood over me like warm waves. We all, once upon a time long ago, came from the and the tears that fill our blurry eyes, even against our will, wash us and heal us.”

According to Mr. Duke, Torri was an invaluable companion in his crusade against “Zionist-driven Globalism.”

“The eternal struggle for our peoples’ heritage and our freedom is so hard sometimes. There are so many difficulties on this high, rough road,” said Mr. Duke. “Torri would sit by me the countless hours as I wrote books and articles. And it seemed she was always telling me, ‘Keep doing your job, I’m doing mine staying by your side.'”

The small dog didn’t simply help Mr. Duke by sitting near him. He also credits Torri with being a sounding board as he created his 1998 “masterpiece,” My Awakening: A Path to Racial Understanding, in which he purports to provide “compelling evidence that belief in racial equality is the modern scientific equivalent of believing that the earth is flat.”

“She truly helped me write my seven hundred page book My Awakening. She was there to listen to me read aloud what I had just written to make sure it had the rhythm and eloquence that I sought. And Torri always looked at me intently when I spoke to her,” Mr. Duke said.

Though Torri clearly spent a great deal of time with Mr. Duke in front of a keyboard, she also traveled the globe with him. In his video, Mr. Duke claims he and the dog “explored ancient European ruins” and “climbed at least 500 mountains and hills” together.

“She even secretly made her way in her shoulder bag into places like the Sistine Chapel, and the Louvre and a number of places that her kind were banned,” explained Mr. Duke.

Torri’s portability was a key part of her appeal to Mr. Duke. In his video he said he chose to get a Maltese, a toy dog breed, because he needed an animal that was “small enough to easily go wherever I went.” This apparently raised eyebrows with his friends as carrying a small, toy dog in a man-purse was incongruous with his image as a white nationalist firebrand.

“A few times my friends told me, ‘How can you carry around that little, quote, ‘fag’ dog?’ I told them that I was a man secure enough in my heterosexuality that I sure was not going to worry about what people might think,” Mr. Duke said.

Indeed, Mr. Duke’s life isn’t all angry racist rhetoric. His love for animals is just one aspect of his softer side. Mr. Duke also moonlights in “PhotoArt,” a discipline he seemingly created himself that involves taking pictures of landscapes and then  using a computer to add “artistic flourish in color, brightness, contrast, composition, line and form to make a truly beautiful photo-artwork that will captivate and inspire you.” According to Mr. Duke’s website, some of his “PhotoArt” has even “been quietly displayed in European showings and galleries under a nom de plume.”

Apparently, in this internet-dominated age, the White Nationalist world, much like the rest of society, is being taken over by Instagram-style digitally-manipulated nature photos and cute animal videos. 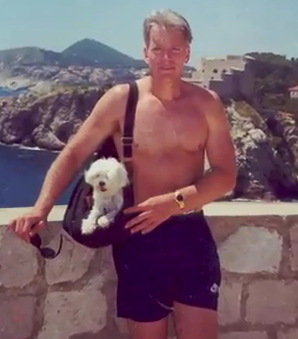