Fueling speculation that he’s gearing up for a statewide run, the Senate president from South Jersey landed a prime time spot on Bill O’Reilly’s FOX News program, where he forced the TV personality to back down from his initial challenge of Sweeney’s record on child protection against pedophiles.

In his quest to become the city’s next chief executive, the downtown Jersey City Councilman has $500,000 in the bank compared to incumbent Jersey City Mayor Jerry Healy’s $100,000.

The President leads Mitt Romney by 13 percentage points (49 to 36%) in New Jersey in this week’s Fairleigh Dickinson University Poll. Even better news for Obama this week was his Quinnipiac/New York Times/CBS News poll lead over Romney in three battleground states.

The state Comptroller released a report this week questioning the Middlesex County Improvement Authority’s awarding of an additional $55,000 payment in 2010 to Executive Director Richard Pucci.  The 30 percent bonus, along with a $4,800 car allowance and $3,565 in unused sick time boosted Pucci’s 2010 salary from the authority to $249,366. Pucci collects an additional salary as mayor of Monroe Township.

Not to be outdone by his fellow Gloucester County Democratic official, Moriarty, charged hours earlier with the same offense, the mayor of East Greenwich collected his own driving while under the influence charge from local law enforcement.

Powerless now in every sense, the human meltdown known as Trenton Mayor Tony Mack returned from vacation to a home without power, shut off by PSE&G as a penalty for the mayor’s failure to pay nearly $15,000 in gas and electric bills. The mayor is the subject of a continuing probe by the FBI.

The former communications director for the state Republican Party here and now working as a spokesman for Mitt Romney, Gorka went dark this week after ripping into reporters with his now infamous “Kiss my ass” gaffe at a holy site in Poland. 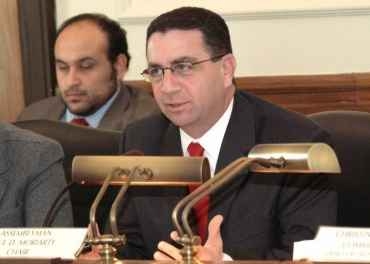