If you haven’t heard of Peter and Harry Brant yet, you should be calling the Postal Service and Time Warner to find out why they’ve discontinued service to that rock you’re living under. The teenage sons of paper mogul Peter M. Brant have been everywhere lately: gracing the Style Section of The New York Times, tweeting from a shared Twitter account and being profiled in this week’s lugubrious three-page spread in the latest issue of  Vanity Fair (to make matters worse,  the piece was titled “Little Lord Flauntleroys”).

Now the blood is in the , and its officially hunting season as the collective new media aims to take a shot at these young male socialites.

Because young master Peter Brant Jr. (18 years old) and his brother Harry (15) fit squarely into Nick Denton’s wheelhouse, Gawker was on top of the Brant children (calling them “The World’s Luckiest Teenage Homosexuals“) before most people had heard of them.

But the mockery of the Brant Brothers didn’t end there. We had to ask ourselves why a site like Cracked.com would be interested in these two, since even negging on regular celebrities doesn’t fit with the pop-culture listicles the site mainly traffics in, let alone making fun of underage rich kids. (You’re more likely to see, say, a story on the many inconsistencies in Back to the Future than an update on Lindsay Lohan.)

Yet on Tuesday, Cracked.com editor Soren Bowie published a 1,300-word-plus open letter to the Brant siblings, titled “Introducing Two Wealthy Young Celebrities You Will Soon Hate.” The piece included such advice as:

Your entire existence, everything you have chosen to be, is so big and means so little … Your personalities are built entirely on some CW show you saw once and have since been unable to shake. A lack of actual responsibilities or needs in your life afford you all the time you need to just sit and invent yourselves from scratch, from the crack of noon until you fall asleep in each other’s arms on the 18th century couch in one of your family’s many living rooms. “We need to be that,” you likely whisper to one another in between kisses, pointing at the flickering flat screen. “We need to become gossip girls.”

(Of course, one could argue that there is no need for the word ‘likely’ in that last sentence, as the brothers think their life is exactly like Gossip Girl, but that’s just splitting hairs.)

If this seems like a particularly harsh take-down of two easy targets, well, Cracked isn’t the only one. (We ourselves are not immune to noting the disproportionate amount of media slobbering over children who have yet to accomplish anything.)

But why, exactly, do the Brant brothers infuse us with such red-eyed rage? We have a theory.

The term “socialite” has become sort of a catchall in the last several years, referring to anyone who is famous for being famous. But let’s be clear here: having a reality show doesn’t make you a socialite, nor does it apply to every one of Paris Hilton’s friends with a sex tape. (But we understand how you might be confused.) True socialites, it turns out, are hard to find, for two reasons:

1) because their existence has been eclipsed by movie stars and celeb-reality wannabes; and

2) because the word “socialite” has been given such a bad rap that most people who do fit the description eschew major publicity. After all, no one wants to appear on a show called High Society when the country is in a recession, lest they be dragged out of their apartments by an angry mob. (Possibly spearheaded by a modern-day Robespierre in a scary face mask, as the dystopic Dark Knight Rises predicted.)

As the Muffy Astors (and even the Tinsley Mortimers) of the world impose a sort of media blackout on their comings and goings, we began our search for the next generation of le bon ton too rich and too young to grasp the concept that “All press is good press” doesn’t apply to The New York Times chronicling your Gossip Girl-inspired lifestyle. And male socialites, like male models, are exceptionally absurd (not least because of their obsession with fashion as an art form).

Consider Peter and Harry Brant the real-life equivalents of Derek Zoolander: innocent idiots who just happen to be really, really, really, ridiculously wealthy. And love Gossip Girl. Don’t blame them for the media shitstorm they’ve stirred up, and don’t go all high and mighty on their parents either. If it’s anyone’s fault, it’s that of the publications who deem the musings of children to be worth your precious reading time. 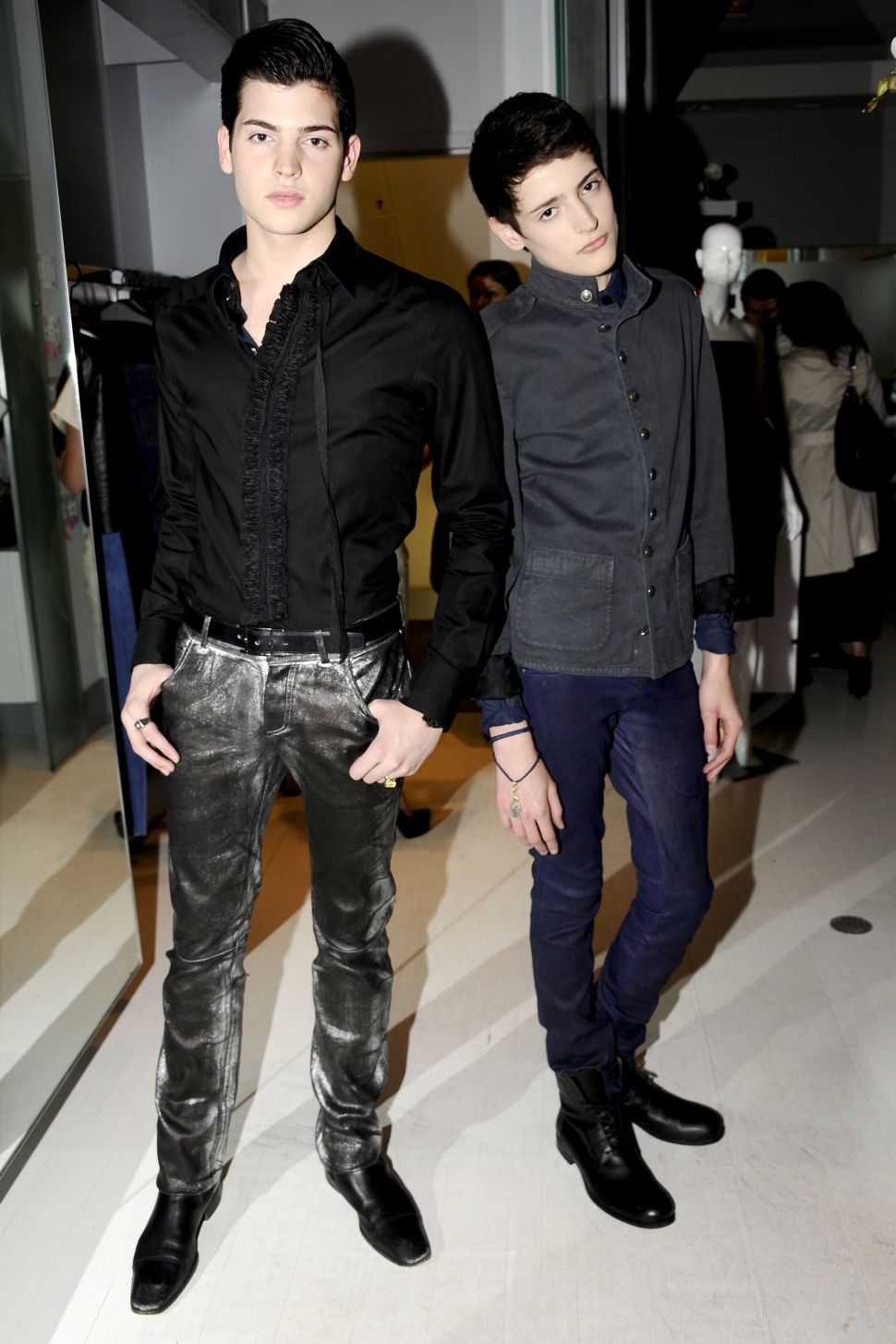