We first noticed it two weeks ago, crossing the Pulaski Bridge between Long Island City and Greenpoint. There it was, monolithic on the skyline as it has been for months now. But there was something different about 1 World Trade Center. Poking up from beneath the skyline of the warehouses in the foreground and the office buildings beyond was a band of red lights. It was hard to tell from there, but maybe there were some blue ones, and it was a U.S.A theme, all be it out of order (white-red-blue) in honor of the Olympics.

Then, there it was again this Friday, almost entirely red, plainly visible up and down Sixth Avenue (above), and no doubt the rest of the city. People have started noticing, and pictures have been making the rounds on Twitter, especially this one at right, shot by Inga Sarda-Sorensen. So we asked the Port Authority—what gives?

It took a day to hear back, but all we found is “It’s for the troops.” The meaning of the color, and the occasion, remain unknown. It does not appear to be any holiday or milestone. Perhaps just an inspired construction crew? Like the team that turned the tower into a giant Christmas tree the past two years. Apparently they are very amped (rightfully so) about veterans, not least because there are many working on the site.

The last time the building was lit up like this was in February, again in red, in honor of the anointing of Cardinal Timothy Dolan.

Once it is clear exactly what the meaning of this impromptu memorial is, we will be sure to update the story with the details. 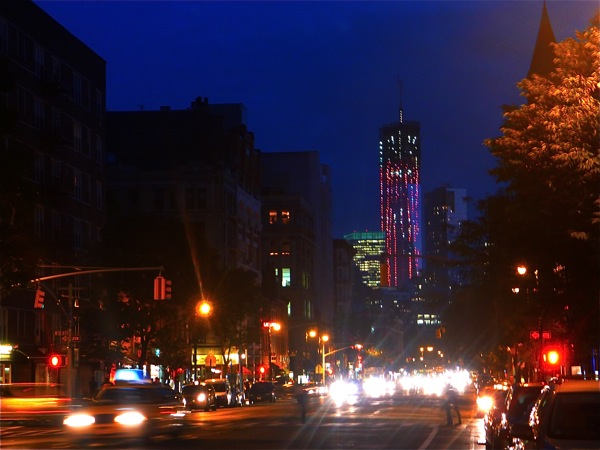