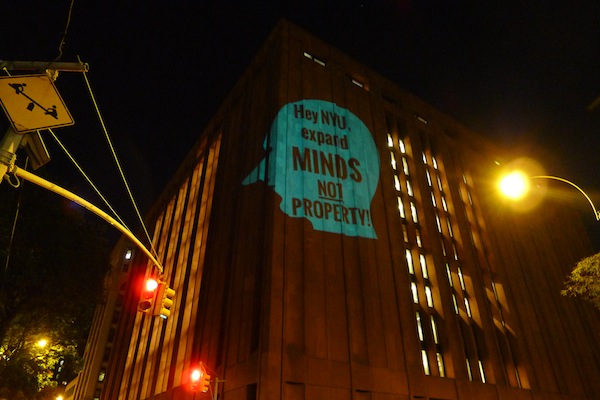 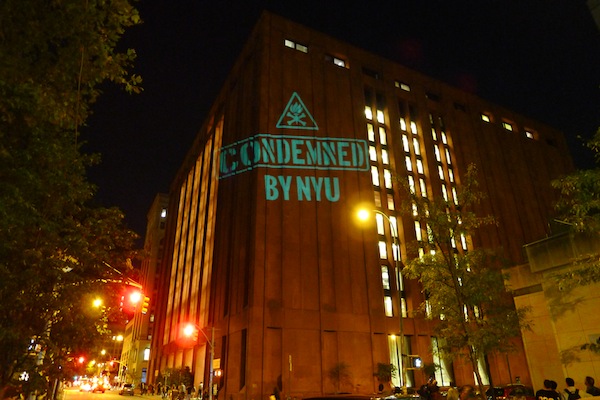 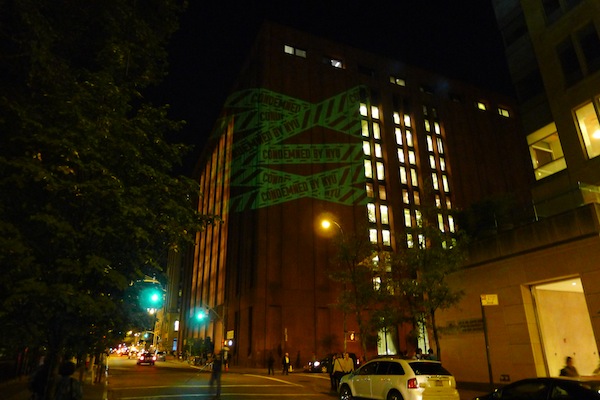 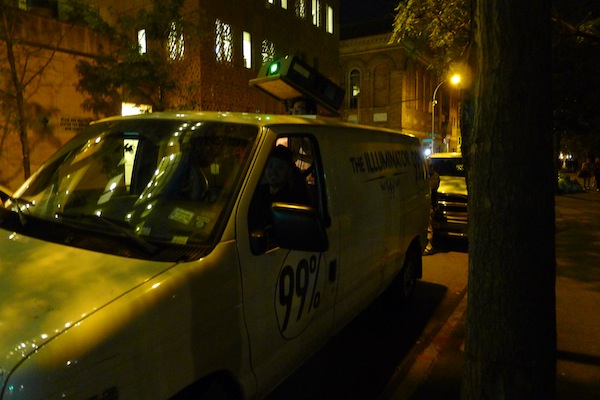 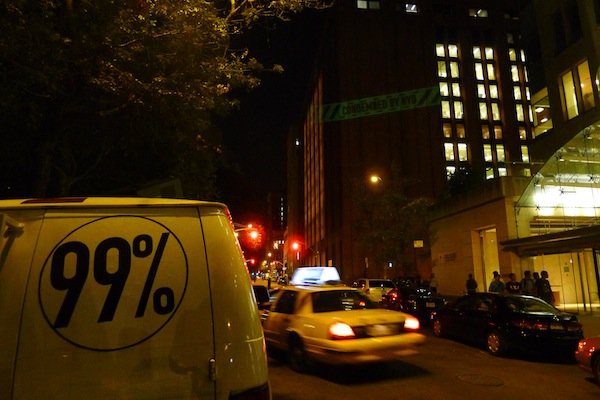 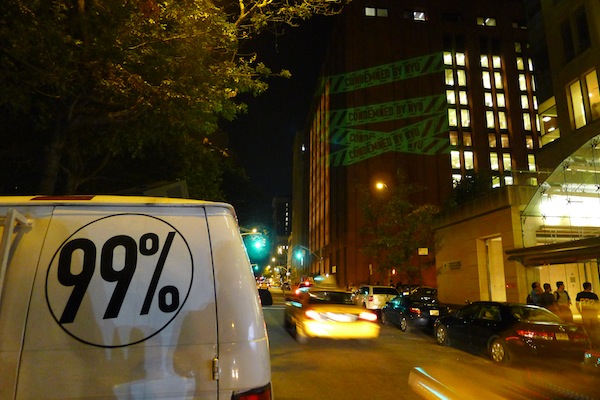 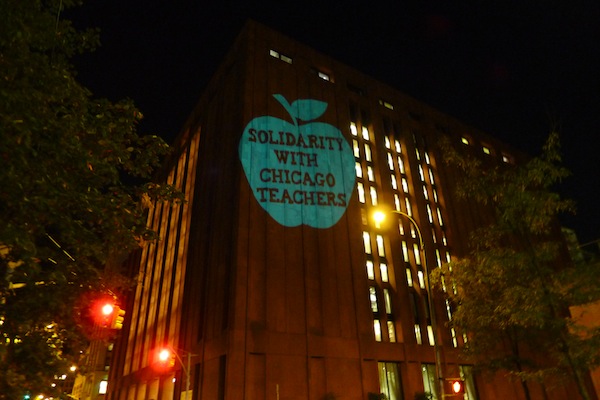 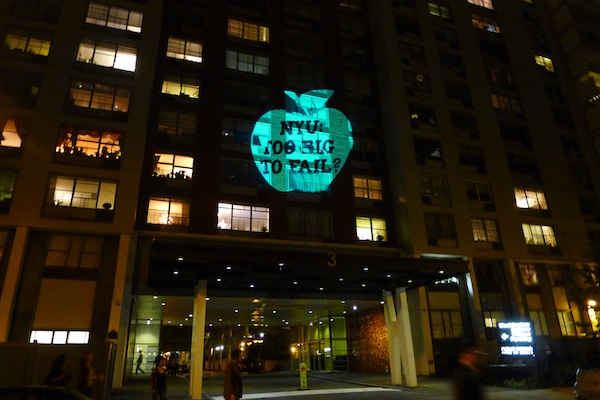 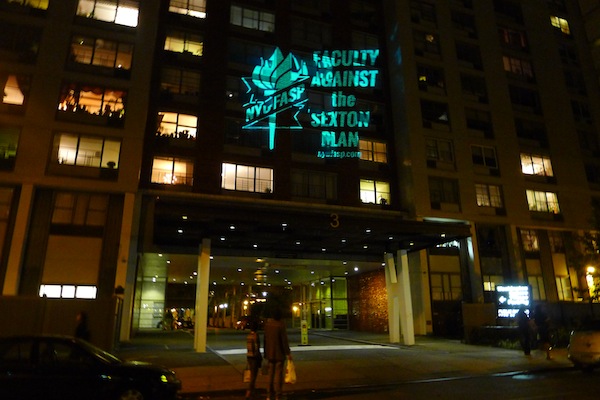 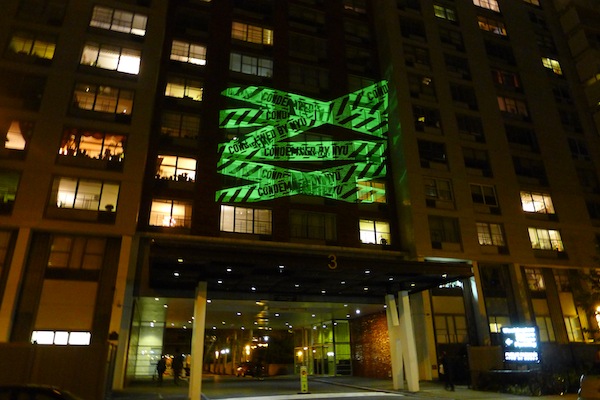 Actually, it kind of is condemned, isn't it?
mchabanobserver 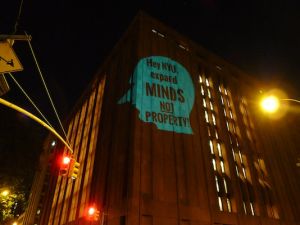 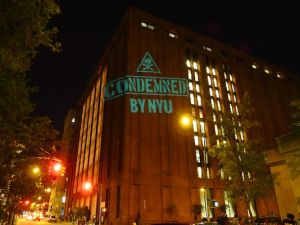 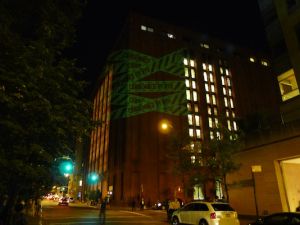 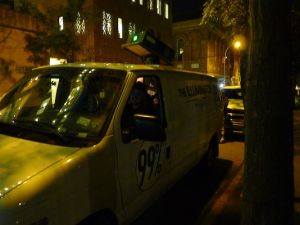 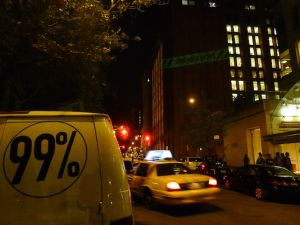 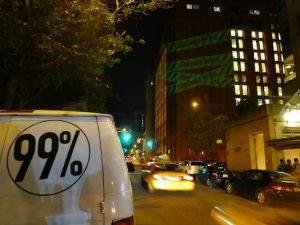 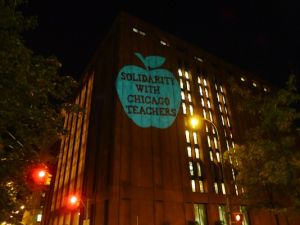 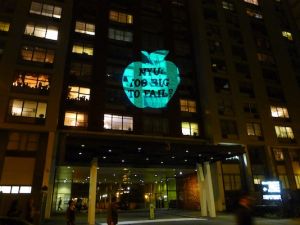 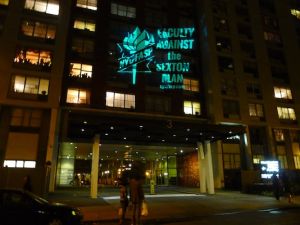 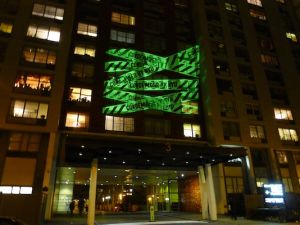 School is back in session, and so are those pesky professors fighting NYU’s plans to expand in Greenwich Village. In the spirit of the season, NYU Faculty has teamed up with The Illuminator, Occupy Wall Street’s Great Bright Hope. Famous for projecting a 99 Percent sign on the side of the city’s ugliest building, the van is back, this time trolling the streets of Greenwich Village rather than the Brooklyn Bridge.

After getting to know a few NYU faculty members, the Illuminator team was asked to partner with them and spread the message on campus. Last night, they hit the street, projecting soothingly clever graphics onto the side of three different structures around campus.

The first target was Bobst Library, where a few students actually bothered to gawk and take cellphone photos before heading off to study. Then came the side of one of the Washington Square Village apartment slabs, where the faculty soon to be afflicted by the campus expansion about to drop into their midst live. Lastly, the illuminator did battle with the already quite illuminated Washington Arch Park at the foot of Fifth Avenue. At least that was the plan; the crew was running behind throughout the evening and there was dinner to attend to.

“We want to get people awareness, to awaken people after the summer,” professor and protestor spokesman Bo Riccobon said. “The faculty disengages over the summer. People don’t like conflict, and NYU was smart enoug to sneak this thing through the City Planning Commission and the City Council in May, June, July, when everybody was gone. This is not over.”

Certainly nothing has been built yet, and murmurings about the fate of university president John Sexton, however unfounded, persist amongst an angry cohort. Then again, the city did vote, and whatever happens, NYU has its millions of extra square feet, whether it wants to build it now, in 2031, or in 2131.

“This helps students, faculty and staff ask questions,” Miabi Chatterji, an organizer for the faculty group, explained. “Like, where is our tuition going, is it going where it needs to go? We’re some of the most indebted students in the country, Times says we have the sixth most debt, in the middle of a recession. Shouldn’t we focus on that, focus on class size, focus on faculty? They’re focusing on the largest real estate deal in the Village’s history instead.”

The light displays were only up for about 20 minutes in each spot, so it was hard to tell what impact they had. “It’s cool, yeah,” said Sharon, a curly-haired sophmore passing by the Washington Square Village light show. (Hope nobody was home for that bright surprise.)

“They should put something funny up, though,” she continued. “It’s a little harsh. Not that it’s not a harsh thing they want to do, it’s a lot of bullshit. But if you want people to do something about it, make it funny.”

Lucky Tran, an Occupy education organizer who helped set up the Illuminator, said there was a visceralness to the protest. “The goal here is just awareness,” he said from the front seat of the “99%” addorned van onto which a giant digital projector had been mounted, “The Illuminator” (and a Twitter handle) emblazoned on its side. “To illuminate anything effected is very exciting. You’re directly communing with the surfaces that you want to change.”

In the park, a group of grown men were putting on another light show, dueling with light sabers, apparently unaware, like everyone else around them, of what was taking place two blocks away.