Alberto Mugrabi, China Chow, Dustin Yellin and Russell Simmons were out of sight when graffiti artist Futura dropped to the floor and began drawing swiftly in a fan’s book last night at a huge warehouse at 560 Washington Avenue. It was the opening of the artist’s solo show “Future-Shock,” organized by Andy Valmorbida, on the first night of New York Fashion Week. Music producers, models and socialites were there, but at this moment, at a back corner of the cavernous room in front of two of his canvases, the artist seemed to be having a quiet moment to himself. He seemed to like it that way.

Futura, who in the early 1980s toured with Afrika Bambaataa and the Clash (he painted live on stage with the latter), was in a white shirt with what looked like a gun holster slung around his shoulders. He was drawing with a black Sharpie pen and his long hair nearly touched the page. He was drawing one of his signature images, a series of circles like something you might see in an astronomy book showing the orbital trajectories of many planets around the sun. He got up and hugged his fan, a young man in a loose T-shirt and jeans, before handing over the book. Then Kool Keith came over wearing a sailor hat and a gold chain and it was all flashbulbs for Futura.

By the front door, a bug-eyed Mr. Valmorbida slammed a beer can onto a table and darted away to talk to some models.

“He just told us not to do that,” said a young woman who was manning the table that had several checklists of the paintings. She smiled and  handed us the checklist, on which next to each of the paintings there were irreverently handwritten markings signifying its cost: “25,” “75” (thousand, of course).

“It’s as though it’s chump-change,” said someone looking over our shoulder, noting the offhanded markings.

From the front of the room, it felt like we were in an aquarium—everything was dark except for the 30-or-so large paintings, which were lined against the walls and very brightly lit.

“Do you know how hard it is to get him?” Mr. Valmorbida told Gallerist about Futura when asked why he chose him for this show. “I had to wait five years. He’s the greatest living artist.”

Mr. Valmorbida, who was dressed like a prep-school boy in a white shirt with a black tie, spoke loudly as Madonna’s “Like a Virgin” blasted from the speakers. Nearby a socialite looking prim in a short mint-green shift talked to a hefty man in a dashiki. British producer Nellee Hooper sauntered over in a grey hoodie with a hood trimmed in grey fur, observing the goings on from half-closed lids, appearing pleasantly tired of it all. When a man walked up to Mr. Valmorbida, smiling as if it had been such a long time since their last party together, they greeted each other like old friends.

“Do you know Ouattara Watts?” Mr. Valmorbida asked us.

Mr. Valmorbida darted among friends and acquaintances, making time to dance with a nearby pack of models. On one occasion, when stranded for a moment without a friend or fan approaching, he looked out into the distance and squinted his eyes, as if momentarily lost. But it was hardly three seconds before he was tapped on the shoulder, rescued by the face of a pretty blonde in a tasseled tank top. 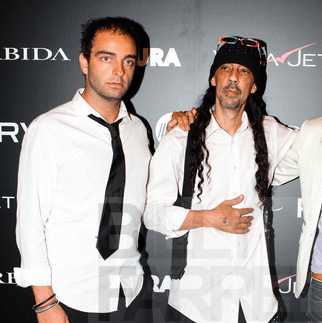