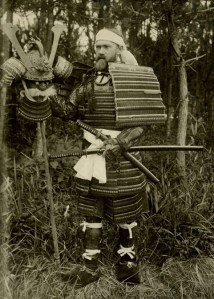 In 1912, Bashford Dean became the first curator of arms and armor at the Metropolitan Museum of New York. He had a reputation as a trailblazer: he explored Japan when the country was still otherworldly to foreigners, and designed armor for American troops in World War I. He schmoozed the Morgans to get them to donate their armor, and wrote Helmets and Body Armor in Modern Warfare, still a standard for modern military strategists. (He was also accomplished in the field of oyster culture, and was the first-ever curator of fishes at the American Museum of Natural History.)

This year, the Met will honor Dean, who died in 1928,  and celebrate the department with an exhibit, “Bashford Dean and the Creation of the Arms and Armor Department,” that takes a look at the curious circumstances that led to a New York museum ending up with one of the world’s most respected armories, boasting a total of 14,000 guns, swords, knives, pieces of armor and all manner of devices to delight the martially inclined.

“In terms of sheer numbers, it probably is one of the biggest,” Donald La Rocca, department curator, said on a recent tour of the space, comparing the Met’s collection with other world-class ones. “In terms of quality, the things that rank highest are probably the ancestral collections” such as Vienna’s, (which evolved with the holdings of the Hapsburgs and the Holy Roman Emperors), Dresden’s (the dukes of Saxony) and Paris’s (accumulated by numerous monarchs). But when it comes to quality, taking into account bloodthirsty breadth, the Met’s collection really has no right to be as profound as it is, being on this side of the Atlantic.

The Met owes that profundity to collectors with a passion for the tools of war. Most of these early armor collectors tended to fall into two categories: well-mannered gentlemen in the European mold, and William Randolph Hearst.

“Because of the romance of the age of chivalry, it was not necessarily a testosterone-fueled thing,” Mr. La Rocca said. William H. Riggs and Rutherfurd Stuyvesant, two of the museum’s first trustees, were major collectors, as was the Duc de Dino, a minor French aristocrat whose trove the museum bought for a quarter of a million dollars in 1904, its most expensive purchase ever at the time. That collection was meticulously assembled over a period of 15 years.

“Hearst was different, in that he would get all these catalogs, and he’d call his people all over the world and say ‘buy me this, this and this,’” Mr. La Rocca said. “Riggs attended sales all over Europe. He sat in the showroom. He annotated the catalogs. They’re invaluable for research and as a record of what he was doing. They really pursued it. Dean went to Europe for three to four months, took the steamship over and traveled, unbelievably, summer after summer, year after year to see the great things and meet the dealer and the collectors. He really pursued them with a passion.”

Around the time the Met bought the Dino collection, Bashford Dean began to work with the museum—first as an honorary curator, which meant he wasn’t paid. He confessed he had no eye for blades, but occasionally wore his purchases from Japan, armor with complicated reliefs. He sold much of that armor to the museum at cost so that he could return and buy more, much of which he would later donate to the Met. He began collecting at age 10, when he bought two daggers from a private collector after he had displayed them at the Met.

When Dean started working with the Met, stateside collectors were so voracious that one German arms and armor curator referred to “the American peril” vacuuming up the world supply for their homes in Newport. Dean was serious about schmoozing for donations at a time when there were important ones to be sought, making him very much responsible for transforming the collection into what it is today.

The new exhibition, which celebrates the department’s centennial and runs from October 2 to September 29, 2013, will occupy a tiny room, the Arthur Ochs Sulzberger Gallery, off the the John Pierpont Morgan Wing that houses the department’s permanent collection, both named for prominent supporters of the collection (next year, the Sulzberger gallery will have an exhibition dedicated to crossbows). The show opens with a large photograph of Dean wearing Japanese armor; next to the photograph rests the armor itself, complete with fuzzy pelt shoes.

“He’s such an original character, you really can’t do him justice in a room this size,” Mr. La Rocca said, flicking on the lights. “But by combining the objects we have with the narrative we have, and the documents and so on, we’ll try and give a good sense of who he was and what he was about.”

A portion of the pieces in the Met’s galleries incorporate relatively new elements—this due to the nature of conservation. “When you got this resurgence of collecting there was a need for armorers to do repair, and from the 19th century right up to the early to mid-20th century, if armor was missing a part, they would just make it,” Mr. La Rocca said. “Old-style restoration like that, we don’t do anymore, but Dean knew from the start of the collection that he needed specialized craftsmen for the maintenance of it, and he was able to persuade the greatest French craftsman at the time, Daniel Tachaux, to come to New York in 1909.”

The museum’s in-house armor shop led to Dean designing helmets for WWI, which were ultimately rejected because they too closely resembled German ones. “Here you have the Star Wars storm trooper helmet,” Mr. La Rocca said, gesturing to another design by Dean that closely resembles the ones from the movie, though in metal, for peering over the trenches. Dean clearly loved the attention he gained from his position, giving talks during which he fired matchlock, Wheelock and flintlock mechanisms onstage at the museum.

Much has changed since Dean’s time. Lighting, for example, is a more and more important element of exhibition. An upcoming reorganization, Mr. La Rocca said, will increase the luster one notices on the items, though it won’t quite be at “jewelry case” levels. Dean exhibited the armor surrounded by tapestries and stained glass, like a Gothic Revival home, but the ideal lighting for metal is much stronger than the light that’s best for those materials, and the galleries have brightened significantly since they were removed in the 1950s.

The biggest difference in the field is that there’s significantly less armor on the market, though the department still works to fill gaps where they exist. Arthur Ochs Sulzberger, former publisher of The New York Times, was a great supporter of the department when he was a trustee at the museum, and helped provide funds for the acquisition of a major collection of Tibetan armor. The department displayed it in 2006, and Mr. La Rocca estimated that about 50 percent of that show was purchased with Sulzberger money over a period of 10 years.

“Tibetans have said this to me: ‘Thank God, you’re actually showing people that we’re not all monks,’” Mr. La Rocca chuckled, then he coughed. “Not that there’s anything wrong with monks.”

The fact is the age of the major collectors has passed. Ronald Lauder, Mr. La Rocca said, will probably be among the last to accumulate such material. Those who come close tend to collect American firearms.

“It’s always nice to get a fresh acquisition so people look and say ‘Oh, this is new!’ but the permanent collections are really deep and rich,” Mr. La Rocca said.

“There will continue to be, for generations, the occasional new object that really is a revelation. When you look at those last few things in our recent acquisitions publications, there are a couple of things that come along that are really stunning and important. But it won’t ever be like in Dean’s period, where the sword collection of Jean Jacques Reubell, who gave this great, amazing collection of small swords because his wife and his mother were both New Yorkers—so you got 400 staggeringly important pieces that make the collection—that type of thing is not going to happen,” he said.

“The era of hundreds and hundreds of things in collections, like in the Dean era, is gone,” he added. “But that’s O.K.—that’s a period of history and it’s over.”