The foundering Greek government, in a state of disastrous financial decay, has begun referring victims of crime to the fascist Golden Dawn party for protection.

The Guardian reports on the experience of a civil servant who went to police with complaints about immigrant neighbors from Albania:

“They immediately said if it’s an issue with immigrants go to Golden Dawn,” said the 38-year-old, who fearing for her job and safety, spoke only on condition of anonymity. “We don’t condone Golden Dawn but there is an acute social problem that has come with the breakdown of feeling of security among lower and middle class people in the urban centre,” she said. “If the police and official mechanism can’t deliver and there is no recourse to justice, then you have to turn to other maverick solutions.”

The Guardian also reports that Golden Dawn, which recently opened a New York office only to immediately have its website and phones attacked by Anonymous, also assists the poor and infirm with social outreach, providing food and clothing–in return for loyalty to the party.

Golden Dawn’s savvy in capitalizing on widespread anger at Greek austerity measures has led to a recent 10 percent rise in the positive opinion about the party, which currently holds 18 seats in the Greek parliament.

The rise of a formerly fringe far-right nationalist party in an economically devastated European nation is not new; it happened in Germany after World War I.

Financial writer Robert Gottliebsen noticed this parallel in May and published “A Weimar warning for Greece” in Australia’s Business Spectator. Mr. Gottliebsen didn’t mention Golden Dawn but he didn’t need to. Referring to the economic devastation across the country he noted that “[out] of such chaos comes political political movements of the extreme left or extreme right.”

Mr. Gottliebsen noted that 1920s Germany flirted with the extreme left, but ultimately chose the opposite. He concluded with a warning:

Greece has all the ingredients for a Weimar Republic if it exits the euro and its new currency becomes worthless… then Weimer Republic style chaos will be its destiny.

American neo-nazis are watching the rise of Golden Dawn. The following video was recently posted in a discussion of the party on the white supremacist message board Stormfront.org. It was posted on YouTube in late July by “Race Realist GR,” who wrote that the video was from a “closed meeting of Golden Dawn.”

We can’t be certain of the validity of the translation, but the first speaker appears to call Golden Dawn ‘a flaming river’ which will sweep away ‘whatever has deprived us from dignity, freedom and the Greece of our dreams.’

The uploader, whose full description of the video appears supportive of the neo-nazis, continued, “I translated one of these to show you the booogie-men who will destroy Greece and Europe lest we stick to the EU-ECB-IMF-MULTI-CULTI-GOD-SAVE-THE-BANKERS plan.”

Even if the English subtitles are inaccurate, the red and black flags, the swastika-like symbol and the stagecraft speak louder than words. 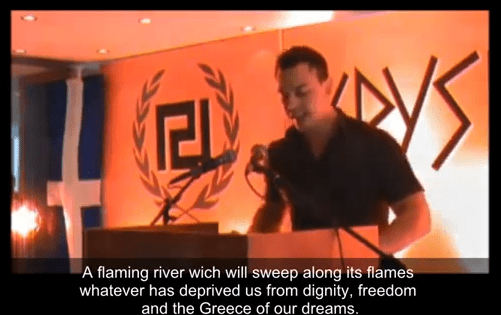