Who says the Department of Transportation does not respect the will of the community in which it is working? Last week, the local community board in Astoria voted against plans for a new pedestrian plaza, wanting instead to preserve access for vehicles on the street. Despite the widespread assumption that the Department of Transportation steamrolls its street-shaping projects through neighborhoods, rarely are they undertaken without local support—even if the result is more expensive, as Streetsblog explains.

Since the board rejected the plaza, which would have cost $75,000 to install, the location will be receiving three smaller, but permanent, curb extensions at a cost of $400,000. The project could begin as soon as spring 2013. Legally, community boards serve only an advisory role, but DOT representatives said at the start of the meeting that the agency would not install the plaza if the community board voted against it.

Meanwhile, local business representatives urged the board to reject the plaza outright. Thomas Anderson of Key Food said the plaza would “eliminate convenient access to our store” and “potentially threaten our viability.” A DOT study of Key Food shoppers showed that 90 percent arrive on foot or by transit. In a line of argument that was repeated by other speakers, Anderson said the plaza would “act as a magnet for undesirable elements.”

Undesirable elements, eh? Compare this to the changes brought about by a new plaza in nearby Corona and then tell us what the desirable outcome is. 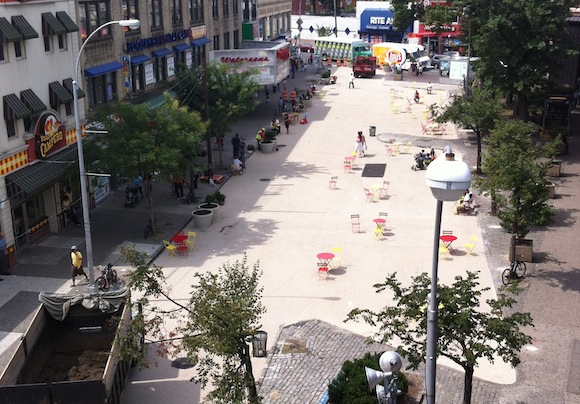