One year after it began, the Occupy movement appears to be waning, but Americans For Prosperity, the conservative economic activist group founded by the notorious Koch Brothers, held a rally near Rockefeller Plaza this morning to “stand up to Occupy Wall Street.” The event included comparisons between President Barack Obama and Fidel Castro, and several heated exchanges between the AFP contingent and Occupy Wall Street sympathizers who showed up to mock and infiltrate the rally.

This morning’s event was part of AFP’s “Obama’s Failing Agenda” bus tour and the group arrived in a large bus emblazoned with a photo of the President accompanied by his infamous quote, “You didn’t build that.” The bus remained parked on the curb on Sixth Avenue throughout the rally. All in all, there were about thirty people in attendance including those who were there to oppose AFP and a large contingent of media.

One of the first speakers at the rally was an older black woman who identified herself as “Barbara from Harlem.” When Politicker asked her last name, she told us it was simply, “Harlem.” In her speech, Barbara articulated AFP’s view that free markets and entrepreneurship are far better for society than the social welfare and redistribution they say the occupiers and President Obama are pushing for.

“Like I tell people all my life, I have never been employed by a poor person,” she said. “I didn’t stay home, I didn’t watch television, I didn’t slide around in slippers. I worked and I was able to buy homes. No one stopped me and I did do it, by the grace of God Mr. Obama, don’t tell me, ‘You didn’t build that.’ Don’t tell anybody they didn’t build that.”

“We’ve seen an agenda similar to this in the world. … It started in Cuba in 1953 under a man named Fidel Castro,” Mr. Lonegan said. The mention of Mr. Castro’s name provoked loud boos from the AFP activists in the audience. “Now, Fidel Castro didn’t believe the wealthy paid their fair share. He wanted them to pay more. Fidel Castro said, you know, you guys didn’t do that yourselves, you need to share that with the rest of us. … And now the people in Cuba live under a pall of darkness, under a dumbed down economy and only wish they could live like Americans.”

To further illustrate that point, the next person who spoke at the rally was Matt Perez, whom Mr. Lonegan identified as “a refugee who escaped Fidel Castro.”

“It is incomprehensible that any leader of our great nation would contemplate changing our prosperity and successful two hundred plus year model into a similar model, which will only bring chaos to our country and suffering for our people,” said Mr. Perez.

When Mr. Lonegan returned to the microphone, he addressed the impression that Americans For Prosperity is not as “grassroots” as it claims to be due to its ties to the billionaire Koch Brothers.

“Every reporter said to me, ‘Well, aren’t you funded by the Koch brothers?’ Are all the reporters listening? Are all you reporters listening? The answer is, Americans For Prosperity is funded primarily by thousands of donors across this country that give to Americans For Prosperity,” Mr. Lonegan said. “People donate to AFP because they believe in freedom and liberty and no other reason, and they expect nothing else than that. And I want to thank Charles and David Koch for their support and I hope to get more of it.”

After the rally, we asked Mr. Lonegan whether there was any way for us to verify his claim Americans For Prosperity isn’t primarily funded by the Koch Brothers.

Throughout the event, the AFP supporters argued with Occupy Wall Street sympathizers who showed up pretending to be part of AFP by holding mocking signs that said things like “I’m Dreaming of a white president…just like the ones we used to have” and “Thank You Koch Brothers.”

One AFP supporter, who said her name was Joan, repeatedly chased a woman holding a “Let Them Eat Cake” sign around the sidewalk. Joan said she wanted the other woman to “know my story.”

“I ate oatmeal because we couldn’t afford to eat, my mother worked!” Joan shouted.

The woman with the sign kept attempting to walk away, but Joan continued to follow her. Michael Hundemann, another AFP supporter, who said he worked as an accountant nearby the Plaza, encouraged Joan to ignore the AFP opponents in the crowd.

“She’s addicted to welfare, she wants food stamps for everybody,” Mr. Hundemann said of the woman with the sign. “She’s a Kool Aid drinking freak!”

“I do want food stamps for everybody! Everybody! I don’t want everybody to be hungry,” another one of the AFP opponents said to Mr. Hundemann.

Mr. Hundemann let out a sigh and began to walk away.

“Don’t even let people take pictures with her. Get in front of her. Block her. Block these losers,” he said to the other AFP supporters.

We asked Mr. Hundemann whether he felt the Koch Brothers’ involvement with AFP compromised the group’s claim of being a “grassroots” activist organization.

“Absolutely not. Whether it’s the Koch Brothers or, then you have the people like George Soros or Michael Moore on the other side, there are millionaires and billionaires that fund both sides,” he said. “It basically neutralizes itself.”

Another woman named Laura Prochaska was arguing with a group of occupiers nearby. She carried a sign with a picture of her dog decked out in patriotic, red-white-and-blue puppy clothes that said, “My VET CARE is BETTER Than OBAMACARE.” The sign was autographed by Congresswoman Michele Bachmann. Ms. Prochaska said she got the former presidential candidate to autograph her sign when she attended a “Hands Off Healthcare” rally in Washington.

After about an hour, the crowd began to disperse and Mr. Lonegan and the other AFP speakers headed back on board their bus. On the way, he was stopped by an occupier with a livestream camera who asked why he was mounting a “challenge” to Occupy Wall Street rather than having “a conversation.”

“Look at how good it did for our turnout here. I used the free market to turn out the crowd and the media and it worked,” Mr. Lonegan said making a sweeping gesture.  “We used Occupy Wall Street to get our message out and it worked very well. It’s a counterpoint right? Why not take advantage of any opportunity?” 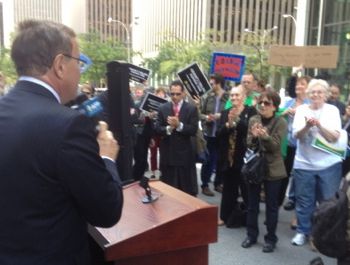