Shelley Adler’s campaign for Congress released a new television advertisement today, her second in as many weeks and the second time she has gone to the video tape.

“FreeAgent” focuses on U.S. Rep. Jon Runyan’s (R-3) votes in Washington that she says gave tax breaks to the wealthiest Americans and encouraged the shipping of jobs overseas. The ad employs the same allusions to Runyan’s professional football career her campaign used in its first ad, released last week.

“Congressman Runyan is not on the side of middle-class families and his record has failed Americans struggling to make ends meet during these tough economic times.  His reckless agenda would actually encourage American businesses to ship jobs overseas by providing tax incentives when large corporations outsource our jobs.  Congressman Runyan has sided with the powerful special interests, large corporations, millionaires and billionaires time and again against the interests of middle-class families.  When I speak to local residents, they are clamoring for change in Washington and Congressman Runyan is the poster-child for how this Congress has failed the American people,” said Shelley Adler.

Sportscaster #1: Now back to John Runyan.  He’s only a rookie in Congress, and already the guy’s a top free agent for outsourcers.  Here’s the replay.

Sportscaster #2: This guy is trying to hold onto his job and –– Bam!  Runyan supports a tax break that sends his job to India.

Sportscaster #1: That has gotta hurt.

Sportscaster #2: Runyan up the middle!

Sportscaster #1: Ouch!  That guy lost his job to China.

Sportscaster #2: One hit after another! For Runyan, this isn’t just a game.  He’s invested hundreds of thousands of dollars in big banks and corporations. 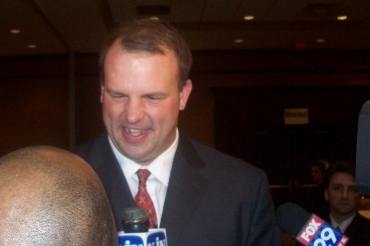