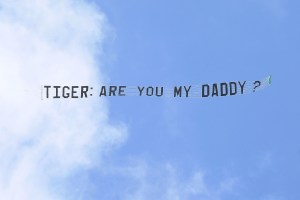 A banner that a plane flew above the 2010 U.S. Open golf tournament. (Courtesy Getty Images)

Sometimes people have trouble waking up in the morning during Art Basel Miami Beach. (The nights go late!) This year, though, an art project will offer an incentive for everyone to get out of bed, or at least open their eyes to look out their hotel windows.

“Plane Text” is being organized by the Morgans Hotel Group in partnership with Van Wagner Communications and Art Basel Miami Beach. Curator Adam Shopkorn, who has organized a variety of projects in New York of late (including presentations of work by LeWitt and Marilyn Minter at the Mondrian hotel in Soho) is at the helm.

To whet your appetite for this plane-based art, here’s a 2009 Los Angeles Times article about a skywritten work by Bruce Nauman.