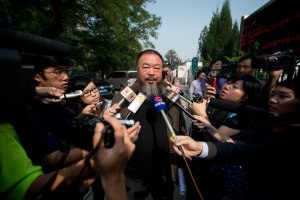 Today, surprising no one, a Chinese court denied Ai Weiwei’s latest appeal of the $2.4 million in fines and back taxes he was ordered to pay last year after being held in detention for almost three months. Many observers believe the charges were motivated by his outspoken criticism of the Chinese government. The court declared that there will be no more appeals, The Guardian reported.

Mr. Ai slammed the decision, telling the paper, “What surprises me is that this society, which is developing at such a rapid rate today, still has the most barbaric and backward legal system.”

The artist has a major retrospective opening at the Hirshhorn Museum and Sculpture Garden in Washington, D.C., early next month, though he almost certainly will not be in attendance as Chinese authorities have refused to return his passport.

With the legal proceedings concluded, the government will be taking its $2.4 million. When the fine was announced, many Chinese gave the artist small donations to help cover the cost. Mr. Ai has said that he will repay those who provided funds.