Air Force One had a close encounter of the Ahmadinejad kind on the way to a campaign event in Ohio this afternoon. According to the press pool report, President Barack Obama’s plane passed by the jet being used by Iranian President Mahmoud Ahmadinejad at Andrews Air Force base in Maryland.

“As Air Force One taxied down the runway at Andrews, plane passed Iran Air, which is parked at the air base, presumably waiting there before spiriting Mahmoud Ahmadinejad home. The Iranian plane is a handsome-looking white 747,” wrote pool reporter Helene Cooper of The New York Times.

Mr. Ahmadinejad is on American soil to attend the U.N. General Assembly where he delivered a fiery, messianic speech this morning in which he criticized the U.S. government for “following an international policy of bullying” and predicted the world will soon witness “the arrival of the ultimate savior,” the Twelfth Imam, Muhammad al-Mahdi, a holy figure to Twelver Shi’ia Muslims.

After Air Force One took off, White House Press Secretary Jay Carney and President Obama’s campaign press secretary, Jen Psaki, discussed the U.N. General Assembly with reporters. President Obama has been taking heat for not scheduling more meetings with world leaders who are here for the annual confab, particularly Israeli Prime Minister Benjamin Netanyahu. Ms. Cooper noted the pair of press secretaries had  “nothing to say on any possible meeting with Netanyahu Friday.” 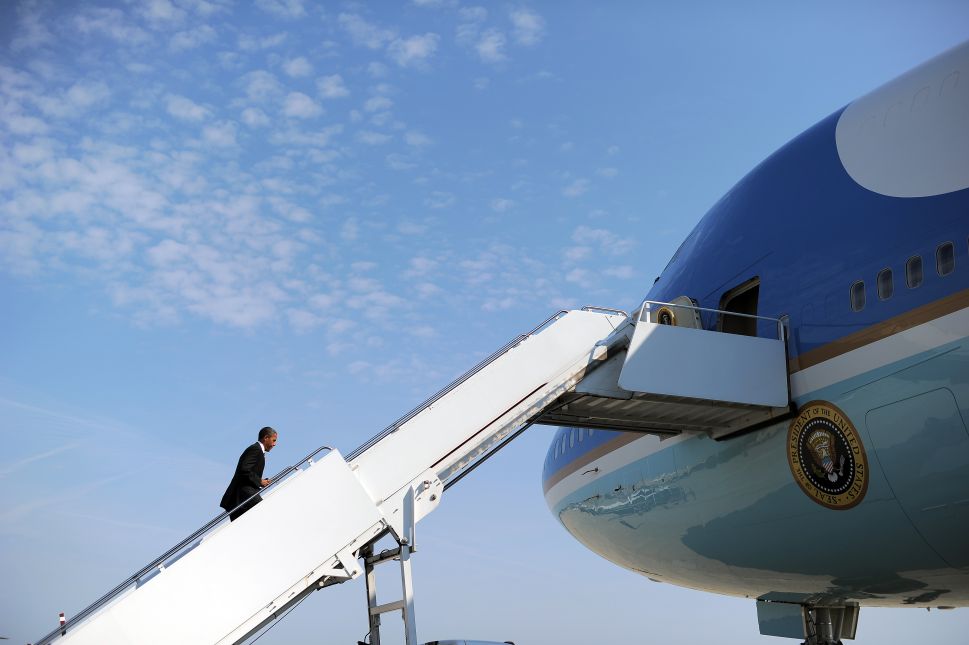