Not so long ago, the sculptor Nick van Woert purchased Ted Kaczynski’s tools in an online police auction. It was nerve-wracking. The whole thing worked a lot like eBay, but if you bid in the last 12 minutes of the auction, it would add another 20 to the clock.

And this is all leaving aside the fact that the things once belonged to one of America’s most infamous terrorists. The two lots cost Mr. van Woert $1,900, and his spoils now sit on a rack in his studio, which, unlike Mr. Kaczynski’s cabin in Montana, is massive, and resembles a factory, a chop shop or something in-between. A friend told Mr. van Woert about the auction because he thought he might be interested in the possessions of a hermit genius murderer, and far from being disturbed at this notion, Mr. van Woert’s thinking ran along the lines of, “fuck yeah!” A lanky 33-year-old from the eroded city of Reno, he has always identified with outsiders.

“He’s tied into a number of other individuals that I’ve latched onto,” he said of Mr. Kaczynski, in his Southernish accent, standing before the tools. He greatly admires Henry David Thoreau, MOVE, the Earth First movement and the Luddites (he once cast a bust of George Washington in bronze, smashed it with a hammer and welded it back together inside out, a tribute to Ned Ludlam). He nearly burned down his studio trying out a chlorine and hair gel combination—meant to serve as a fuse for a gasoline-soaked billboard—that he found in Edward Abbey’s eco-terrorism guidebook. “Thoreau had this idea, this lifestyle he endorsed, this stripping away all the modern amenities and living in the woods, with Walden,” he said. “And the Unabomber sort of falls into that same category. He was anti-” he paused, “well, everything, I guess.”

Mr. van Woert’s studio bustles—he’s been busy preparing for Artissima, a fair in November in Turin, Italy, where he’ll be featured in a special section. Four people work in the studio four days a week, and welding sparks fly amid ominous metal devices.

Given all the other tools lying around the studio, the Kaczynski set is almost nondescript. There’s an axe, two trowels, pipes of various lengths, a welding mask and a recorder, the musical instrument, in a belt case with the initials TJK on it. They were recently incorporated into a major piece, similar to a few others he’s made recently, called History, that looks like a tool wall in a suburban garage. Each tool is cast with sand, which is packed into a box around it before the bronze is poured in. This gives the resulting artworks a drippy look that renders the original objects indistinct. History appeared in a show at Hauser & Wirth this past spring curated by the artist Matthew Day Jackson, who, at a press preview for the show, nervously stood before it and revealed where some of the tools had come from. It has an effect on people when they know, Mr. van Woert said. They tend to step back a little.

His assistants are no-nonsense, and though there’s a tone of levity amid all the statues and chemicals one finds at his studio—there’s a skateboard ramp and a foosball table—the informality just serves to remind you that this is all about anarchy. As we spoke about Kaczynski, a nearby worker carefully shaped sand around an object, as though it were icing, or C4. Mr. van Woert’s latest piece in the tool wall series involves only surgical tools, organized by where each object would be used on the body. The skull cracker is in the middle and the flesh hooks on the outer rim. It’s reminiscent of Damien Hirst’s pharmaceutical works.

“I’ve always been against mold-making, because for me its roots are in mass production,” Mr. van Woert said, “which is something I’ve never really been interested in. Sand mold, it’s an absolute bitch, but you get one cast from each mold. It gets destroyed? You have to redo it all over again. In a way it’s like growing vegetables. It’s in the dirt. You just hack it up, tend to it and dig it out.”

The tool wall pieces are different from most of his other works, which, put simply, involve the destruction and recombination of cheap fiberglass statues. Mr. van Woert and his assistants fill them with brightly colored polyurethane, dissect them, and place them in orbit around a vertical pole. Or they drill holes in them and porcupine them with colorful balls like a DNA model. Or they place them facedown and drip bright polyurethane over them so that it pools, and then raise them vertically, so the flat surface is up straight and they appear to be melting horizontally.

At his studio, there are rows of cheap fiberglass figures, classical knockoffs, and you’re never too far from one of them in some kind of state of destruction. If that’s the right word—destruction, here, somehow makes them more present rather than less. He buys the figures at a casting place in Chelsea that also makes statues for the set of Martha Stewart’s television show; some of them are cast from Etruscan bronzes, but most just look like garden decorations.

“I DON’T FEEL like he’s one of these artists who is deeply involved in the art world,” said the curator Simon Castets. Two years ago, he put Mr. van Woert in a group show, the final exhibition at Yvon Lambert’s New York gallery, and Mr. Lambert snapped him up soon after. “He’s not somebody who’s producing art that he knows will fit in a certain bracket. He’s very concerned with his own thing and his own obsessions—geography, geology, ecology and historical reference.”

He destroys his statues slowly, too. A wooden bust, its surface eroded by shots from a BB gun, sits at the edge of his studio. The piece isn’t quite finished, Mr. van Woert said, more firing will be required. The same went for a waist-high granite Mickey Mouse, which sat in a bucket below a pump filled with battery acid. The goal was to eat away the quartz in the stone, but it wasn’t working too well. Mickey’s nose had melted away, but his eyes still shone eerily. “I probably should have gotten a sandstone one,” Mr. van Woert said, thoughtfully, as if working out the chemistry in his head.

Mr. van Woert has been refining his art since he started making it, in his undergraduate days at the University of Oregon’s architecture school, but it’s not insignificant that he hails from Nevada.

One of his more geological statues, Haruspex, was inspired by a Roman concept whereby city planners would send out a scout to dissect the entrails of local fauna before building a settlement in any given location. If the entrails were healthy, they’d build. Mr. van Woert did something similar with his previous studio in Bushwick, scooping up the trash outside his door, and building it up like a quartz formation, using polyurethane to fuse the cans and cigarette butts to the waist of a smashed fiberglass statue.

Discussing that statue, we’d wandered over to some big barrels of polyurethane near the entrance to his studio, not far from a row of fiberglass sculptures; these are his two favorite raw materials.

“Polyurethane is the Coca-Cola of the built environment,” he said. “It’s in fucking everything that we buy and build.”

Mr. van Woert can be laconic, and he claimed, a few times in our interview, to be profoundly awkward. But he’s not, especially not when he feels strongly about something. I asked him if he disliked these fiberglass sculptures because they’re mass-produced—he said that wasn’t quite it.

“Stone sculptures represented a very monolithic understanding of the human body, in spirit and material,” he said, glancing at the row. “You could go a thousand ways with that idea—one god, one way of living—it’s one material, solid, permanent. Now we make them hollow, with a chemical concoction that mimics that way of looking at the body, and it’s a superficial understanding. It’s all about the surface—how the light bounces off of it, the classical sculpture composition. These,” he gestured at them, “are playing that game visually but not materially. That’s just who we are now. We’re not interested in anything else.

“Because it’s not like we’re running out of stone,” he said. “It’s a fucking planet made of stone. And trees as well. So why this?” He glanced at the statues again. “It’s just what we trust, or something.” 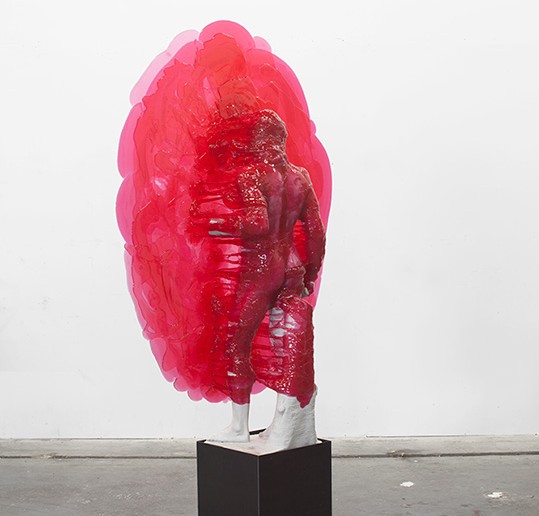