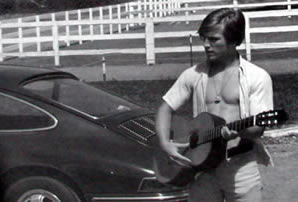 The Andy Warhol Museum will release, for the first time, the artist’s 1968 film San Diego Surf. It was filmed in color with two cameras–operated by Warhol and Paul Morrisey–in La Jolla, Calif., but the editing long remained unfinished.

In 1995-96, the Andy Warhol Foundation commissioned Paul Morrissey, under the supervision of Foundation curator Dara Meyers-Kingsley, to complete the editing, based on existing notes and the rough cut. One of the last films in which Warhol had direct involvement, San Diego Surf was the first time Warhol had made a movie in California since the early Tarzan and Jane Regained, Sort of…in 1963. The month after San Diego Surf filming was completed, Warhol was shot by Valerie Solanas, which virtually ended his work behind the movie camera.

The film has never been publicly shown. It will premiere at the Museum of Modern Art at the “To Save and Project” festival, which runs Oct. 11-Nov. 12.
In more Warhol news, the Metropolitan Museum of Art’s massive survey of Warhol and his influence on contemporary art, “Regarding Warhol: Fifty Years, Sixty Artists,” is now open. It runs through the end of December.