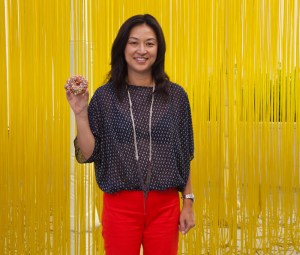 When Christian Marclay’s The Clock goes on view at the Los Angeles County Museum of Art for a 24-hour screening on Sept. 22, there will be a special treat for visitors: free donuts and coffee. ForYourArt is hosting 24 Hour Donut City II: LACMA’s Choice, a pop-up donut shop at its space across the street from LACMA. And while this is the second iteration of the donut shop, this time around, ForYourArt will be stocking its shelves with the favorite picks from the staff at LACMA, including the selections of Franklin Sirmans, Christine Y. Kim and Michael Govan.

“When I feel like indulging,” said Christine Y. Kim, the associate curator of contemporary art at LACMA, “I get a chocolate glazed with rainbow sprinkles. It’s one of those childhood things—where you think that the color of the sprinkles makes a difference—that I still hold onto.”

Ms. Kim, who recently moved to Los Angeles from New York, where she was an associate curator at the Studio Museum in Harlem, is one of 12 staff members who have selected their favorite donut from shops around the city known for its 24-hour donut shops, an outgrowth of its storied freeways and car culture. Ms. Kim’s choice, though, only requires a quick walk to SK’s Donuts & Croissant, a plain and simple donut place just two blocks away from the museum.

During the 24-hour screening, the flavor will change every two hours, refreshed with a new variety chosen by another LACMA staff member. Depending on what hour you arrive, you might be treated with a traditional New Orleans beignet from the Gumbo Pot (the choice of Franklin Sirmans, curator of contemporary art), a coconut cake donut from Bob’s Coffee & Donut (the favorite of director and CEO Michael Govan) or a buttermilk bar from Winchell’s Donut House (the choice of director of special projects Erin Wright). To make your coffee talk all the more enlightened as you chomp on a cruller, ForYourArt has commissioned new essays from Andrew Berardini and Ed Schad about The Clock.

“I was down at the Geffen Contemporary, near Japan Town, and someone introduced me to this little open air mall and they just had these fantastic delicacies there,” said Miranda Carroll, the director of communications, about how she found her selection, a Green Tea Donut from Café Dulce. And while Ms. Carroll doesn’t know at which hour they’ll be serving her donut, she expects the crowds will be big. When they showed The Clock at the Leo S. Bing Theatre around 7,500 people passed through.

“Especially at midnight, Everyone crowds into the theater. said Ms. Carroll. “When that clock comes around to midnight, there is a big burst of applause.”