As Mayor Bloomberg courted the wrath of the beverage industry yesterday by reminding them all how poor they were in comparison with him, New Yorkers trembled their mighty stomachs in fear that the new ban on sugary drinks over 16 ounces would ruin their hard-drinking soda ways in movie theaters and fast food outlets.

But even Bloomberg’s far-reaching proposals couldn’t touch the most sacred of all distended cup sizes: 7-11’s Big Gulp.

Despite the nickname “Big-Gulp Ban,” it turns out the Board of Health’s 8-0 vote to pass it doesn’t extend to actual 7-11 Big Gulps or even Double Big Gulps, which are 64 ounces and are monstrosities that laugh in the face of God. This is because only restaurants are regulated by state law, and “restaurants” are defined as “deriving less than 50% of their revenue from prepared foods,” though movie theaters and sports arenas are also subject to the ban.

Starbucks and Dunkin’ Donuts are also not subject to the new regulations that will go in effect next year, because their drinks contain dairy. 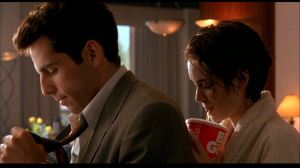