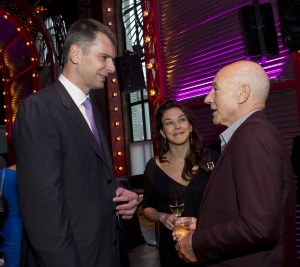 Last night at the 30th Next Wave Gala at the Brooklyn Academy of Music, billionaire and Brooklyn Nets owner Mikhail Prokhorov and his sister Irina announced a new partnership between BAM and their foundation, the Mikhail Prokhorov Fund. The initiative, titled TransCultural Express: American and Russian Arts Today, will deliver $1 million in funding over three years, financing a variety of programs in Brooklyn and Siberia.

BAM landed the commitment from the Prokhorovs some time last year, after Ms. Prokhorov held a talk for the production of Three Sisters at the institution, and she and BAM president Karen Brooks Hopkins began discussing possibilities.

“Irina is really the cultural leader for the Prokhorov fund,” said Ms. Brooks Hopkins. Ms. Prokhorov is in town this week to iron some details of the collaboration.

The venture will begin programming in 2013 with a variety of performing arts, literary and film events and will focus for the most part on contemporary arts. In Russia, they’ll be focusing on bringing art to desolate stretches of Siberia, where there’s a lack of cultural programming.

The first year will see contemporary Russian films presented at BAMcinématek, BAM’s Eat, Drink & Be Literary series will feature a visiting Russian author, and a Russian visual artist will be invited to create a public art project in Brooklyn. The next year, BAM’s stage will see some larger productions in theater and dance. As far as bringing visual artists from the U.S. to Russia, that hasn’t yet been settled and further details will be discussed in the coming weeks.

Thus far, the U.S.-to-Russia arm of the partnership will see the Philadelphia-based hip-hop dance company Illstyle and Peace Productions presented in Siberia. A prominent American author, as of yet undecided, and a program of contemporary American cinema will also travel to two Siberian cities: Krasnoyarsk (home to the Prokhorov fund) and Novosibirsk.

“The idea of a Brooklyn Siberian cultural exchange I think is something no one has ever done before,” said Ms. Brooks Hopkins. “So, we’re going to Siberia.”