EDISON – Will Gov. Chris Christie be a likely presidential candidate in 2016 if Mitt Romney loses to Barack Obama in the November election?

Speaking at a New Jersey Chamber of Commerce forum Thursday night, the Democratic strategist predicted the former Massachusetts governor will lose his bid for the White House to Obama in the fall and that it will open the door for Christie “to be taken seriously.”

“I think he is attractive in the sense that he doesn’t sound like a typical politician,” said Carville, adding if Republicans fail to clinch the election then “they’re going to conclude” that their appeal is too narrow.

“They’re going to be looking for something that is kind of different,” Carville said. “If they do lose, he’ll certainly come into the race as somebody who’s to be taken seriously.”

Carville based his opinion on his prediction that Republicans will scramble to change their brand if the party is unsuccessful in making Obama a one term president.

“Politics is like a business, if you don’t adjust, you’re out,” he said, explaining Republicans need to expand their base.

Of course, that wasn’t exactly the same opinion of the chamber’s other featured speaker, Republican strategist Mary Matalin.

Matalin, Carville’s wife, said she agreed Christie will ultimately be an appealing candidate for the White House for many of the same reasons, but disagreed he would have a chance to run in 2016 – when she says Romney will be running for re-election.

Both agreed Christie’s appeal will be welcomed by the Republican Party in the coming years, saying New Jersey’s governor will undoubtedly remain in the national spotlight moving forward.

The couple, each of whom have more than three decades of experience in politics, also gave varying predictions on how the fall election will play out.

Look at the polls, Carville said, more likely than not Obama will win re-election. Although he agreed much could change during the upcoming debates, Obama’s team is prepared for it and he’ll be a two-term president.

Remember Christie’s race for governor, Matalin said. It ain’t over until it’s over, she said.

“There’s no increased support for any of his policies,” Matalin said of Obama, adding the Democrat’s post-convention surge was simply due to the fact that he’s “a better politician.”

“My point is saying this, the polls would suggest that Romney is behind, he is behind, (but) he’s not as far behind as Reagan was at this point,” she said, explaining the debates will prove an opportunity for Romney to better explain his policies. 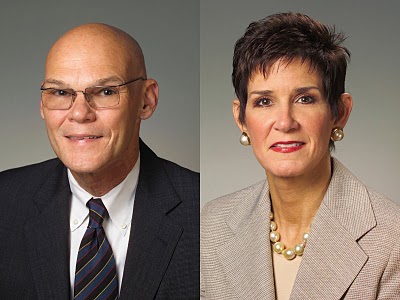