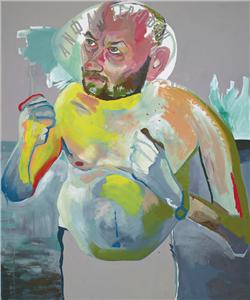 Yesterday Christie’s and Sotheby’s made a number of announcements about the big-ticket lots they have secured for their November contemporary sales in New York. Over in London, though, Christie’s sent out a release noting that it will offer 14 self-portraits by Martin Kippenberger in just a few weeks, on Oct. 11 and 12.

The pieces, which include 13 works on paper (including examples of his trademark self portraits on hotel stationary) and one major painting, were collected by a single collector friend over the course of 25 years. The artworks are dated from the early 1970s to the 1990s. Kippenberger died in 1997 at the 44.

The major oil painting is an untitled 1992 work from Kippenberger’s “Hand-Painted Pictures” series. It has the coveted cover spot on the auction’s catalogue, and carries an estimate of £2.5 million to £3.5 million ($4.1 million–$5.7 million). If anyone is interested in acquiring it for The New York Observer‘s culture desk, I can be reached at the e-mail address below to discuss shipping.