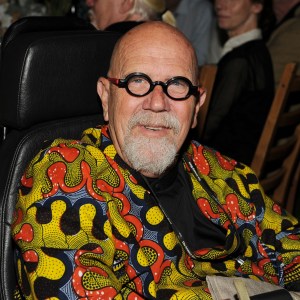 In this week’s New Yorker, Calvin Tomkins details the creation of Chuck Close’s portrait of President Obama. Working from a Polaroid, Mr. Close created a woven tapestry of the president’s image, which was on view at the Mint Museum in Charlotte, N.C., during the Democratic National Convention. The tapestry is one of 10 that Mr. Close is making of the president, which are set to go on sale for $100,000 each, along with a variety of other prints, at a private invitation-only sale in October to benefit the Obama Victory Fund.

Though Mr. Close is on president Obama’s Committee on the Arts and Humanities, it apparently wasn’t easy even for him to get a sitting with the president.

“I’d photographed Hillary Clinton for her Senate run, and the portrait I did from that was sold for a lot of money,” he said. “We also organized an art auction for Gore, and I made a tapestry of him as well. I offered to do this for Obama, during his first election campaign, but there was no response.”

Nonetheless, Mr. Close finally got his sitting, and even got the president telling off-kilter jokes, “completely in jest.”