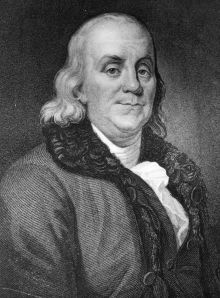 Police in Lower Merion, Penn. are on the lookout for a Philadelphia woman accused of stealing a bust of Benjamin Franklin from 1778, a version of which, acquired by the Philadelphia Museum of Art, was valued at $3 million, according to The Delaware County Daily Times.

An autographed picture of early 20th century composer and conductor Victor Herbert is also said to have been stolen. The suspect had worked as a cleaner in the home where the items were stolen.