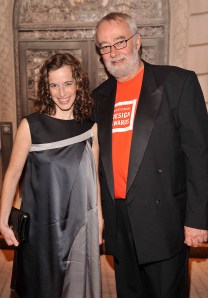 Bill Moggridge, the director of the Smithsonian’s Cooper-Hewitt, National Design Museum, who helped develop the first laptop computer, died on Saturday, Sept. 8, at the age of 69. The Cooper-Hewitt announced his death this weekend. The cause was cancer.

“In his two short years as director of Cooper-Hewitt, Bill transformed the museum into the Smithsonian’s design lens on the world,” Smithsonian Secretary Wayne Clough said in a statement, “and we are forever grateful for his extraordinary leadership and contributions.”

Besides designing the laptop computer, called the Compass, in the early 1980s, Mr. Moggridge was “widely viewed as a father of the field of interaction design, a discipline that focuses on improving the human experience of digital products,” according to The New York Times.

He ran his own design company in Silicon Valley for years, before joining with two other designers to form a firm called IDEO in 1991, which conceived designs for everything from personal digital assistants to portable heart defibrillators, according to The Times.

In 2009 Cooper Hewitt awarded him its National Design Award for Lifetime Achievement, and the next year he was appointed the museum’s fourth director. Caroline Baumann, the associate director of the museum, will now serve as acting director.

The Cooper-Hewitt is currently in the middle of a substantial renovation project that will be completed in 2014. “His innovative vision for the future of the museum will be realized upon reopening, and his foresight will impact museum visitors and design thinkers of tomorrow,” Smithsonian Under Secretary for History, Art and Culture Richard Kurin said in a statement. He will be greatly missed.”