FORKED RIVER – Meeting head-on the attacks of Democrats politically charged by a moribund economy, a brawl-ready Gov. Chris Christie denied they can legitimately summon moral traction to attack him on anything.

“I’ve been nice up to this point, but now I’m calling them out,” Christie told an appreciative crowd. “A little bit of hypocrisy is to be expected, but this is over the top.”

Christie’s amped counter attacks in an economic downturn with 9.9% unemployment in New Jersey and a Democratic Party revived by a successful national convention go to the heart of the Republican governor’s 2013 re-election strategy and to a targeted effort to play in key battleground districts for a larger GOP legislative presence.

In Forked River yesterday, the Republican governor tried to show the opposition as hopelessly out of alignment with the people, going back to the era of Gov. Brendan Byrne, who implemented the first state income tax.

Greenwald wasn’t the governor’s only target in the room at ground zero of Christie’s Ocean County base, he had plenty of vitriol to go around.

Joining Christie at the event were U.S. Rep. Jon Runyan (R-3) and Ocean County Republican Committee Chairman George Gilmore, who both sat up front at the local Elks Lodge packed with 600 steamed supporters.

After they closed the doors on the event the only other person allowed in would be the fire marshal, or so they said.

Describing various bills, he savaged the legislative efforts of everyone from Assemblyman Vincent Prieto (D-32) to Assemblywoman Connie Wagner (D-38).

Christie mocked Sweeney to laughs when he described the Senate President’s reaction to Christie’s declared interest in bipartisanship. “Uhhh,” Christie said into the mike, projecting what he said was Sweeney’s confused response to the overture.

Sweeney and the Republican governor partnered on public worker pension and benefits reform, while holdovers from the Codey and former Assembly Majority Leader Joe Cryan (D-20) wing of the party writhed over what they see as Sweeney’s and Democratic leadership’s acquiescence to Christie’s budgeting priorities.

Now, with Christie presumably running for re-election at the top of the ticket next year and driving turnout, the GOP considers District 3 very winnable.

“Sweeney’s margin last year was definitely tighter than he would have liked,” said Murray. “But he accepted that risk during redistricting in order to make LD1 safer for Van Drew & co.  Gloucester appears to be fertile ground for Republicans, but the county GOP can’t get everyone on the same page.”

Sweeney has other options besides running for re-election, but he insists he hasn’t yet decided whether he would run for governor against Christie in 2013. “After the (November) election,” he told PolitickerNJ.com when asked about his plans.

Soured relations between South Jersey and Christie in addition to the state’s economic woes and the Senate president’s own statewide ambition may prompt Sweeney to consider the matter harder, said sources close to him. If Newark Mayor Cory Booker doesn’t run, it’s tough to rule out anything at this point, a Democratic source close to the Senate president said.

In any event, he said he isn’t scared of his re-election in the 3rd, said an ally – pointing to the Senate president’s own victory in the worst political weather, when Christie beat Corzine in Sweeney’s back yard.

“I’m too busy practicing law (to give an answer about 2013 political plans),” Mulligan said.

As for Singleton, the Joe Roberts-groomed Burlington Democrat is one of the South Jersey Democrats’ rising stars and a rumored future speaker of the General Assembly. Christie made a point of invoking him not once – but twice – in connection to supplemental bills Singleton co-authored with Assemblywoman Connie Wagner (D-38) and Assemblywoman Bonnie Watson Coleman (D-15).

A Burlington County GOP source said the party is looking at several potential challengers to the Singleton/Assemblyman Herb Conaway (D-7) duo, including Sheriff Jean Stanfield, and former Freeholder Director Aubrey Fenton – a favorite of the governor’s.

A dark horse could be former Assemblyman Joe Malone, who is still sitting on $125,000.

“No wonder the governor didn’t mention our unemployment which is at a 35-year high,” said the senator, when told of the governor’s reference to her as someone who never met a tax increase she didn’t embrace. “The governor is trying to distract from the fact that New Jersey is hemorrhaging jobs to other states, His approach is loud enough and offensive enough, people will forget that we have been deemed not a good place to do business and we’re 47th in economic growth. I find it funny this is a governor who has a reputation of telling it like it is. He tells it like it isn’t, just louder. He’s in over his head on the economy.”

The one Democrat Christie didn’t criticize – and never has publicly, at any of his town hall events – was Booker, who yesterday stood at the top of a poll as the strongest among possible challengers to Christie in 2013.

Booker is ironically part of the reason for Christie’s aggressive response, said a source. A Republican power player described the governor’s irritation at South Jersey deriving in part from what he perceives as South Jersey Democratic leader George Norcross’s efforts to get Booker to run against him.

The source said Norcross encouraged the charismatic Newark mayor to consider a challenge of the sitting Republican. Christie didn’t like that, because he thought he and Norcross had a relationship transcending party, said the source.

Nonetheless, the specific attacks on Sweeney and Singleton are Christie code to South Jersey and to Norcross, said the GOP source: shape up and we can continue to have a legislative relationship or we can go to war.

“I think there was an expectation in the governor’s camp that Norcross would sit back like in 2009,” said Murray. “If that’s not the case, Christie is signaling the potential for a war by putting Norcross’ closest ally in his sights.”

Few insiders in the party say they believe Booker will oppose Christie next year. Christie maintains a 55% favorability rating, he and Booker have a longstanding friendly relationship going back to Christie’s tenure as U.S. Attorney, and the Newark mayor continues to project U.S. Senate more than gubernatorial vibes.

But national Dems want Christie bloodied in advance of 2016, and are convinced Booker can do it, said a Democratic source.

Speaking on condition of anonymity, another powerful Democrat said a bulletproof legislative map prevents Christie from being able to execute a Republican takeover of the Legislature, denied South Jersey sweats him, and chalked up Christie’s fulminations to the dimming of his national-sized nimbus.

“I do think the governor has been on edge since (his) flop in Tampa,” said the source, in reference to Christie’s keynote address to the Republican National Convention (RNC).

“It’s smart politics,” added another. “He’s had a bad couple of weeks. He’s trying to change the subject.”

Another Democratic power player said the root of Christie’s latest anger with Sweeney has more to do with their backroom wrangling over the Supreme Court’s two vacancies. The governor thought he could push through former Assemblyman Lee Solomon because he’s from South Jersey, said the source – but Sweeney has been unwilling to accept him and continues to insist on a more balanced approach to the vacancies, infuriating the governor. 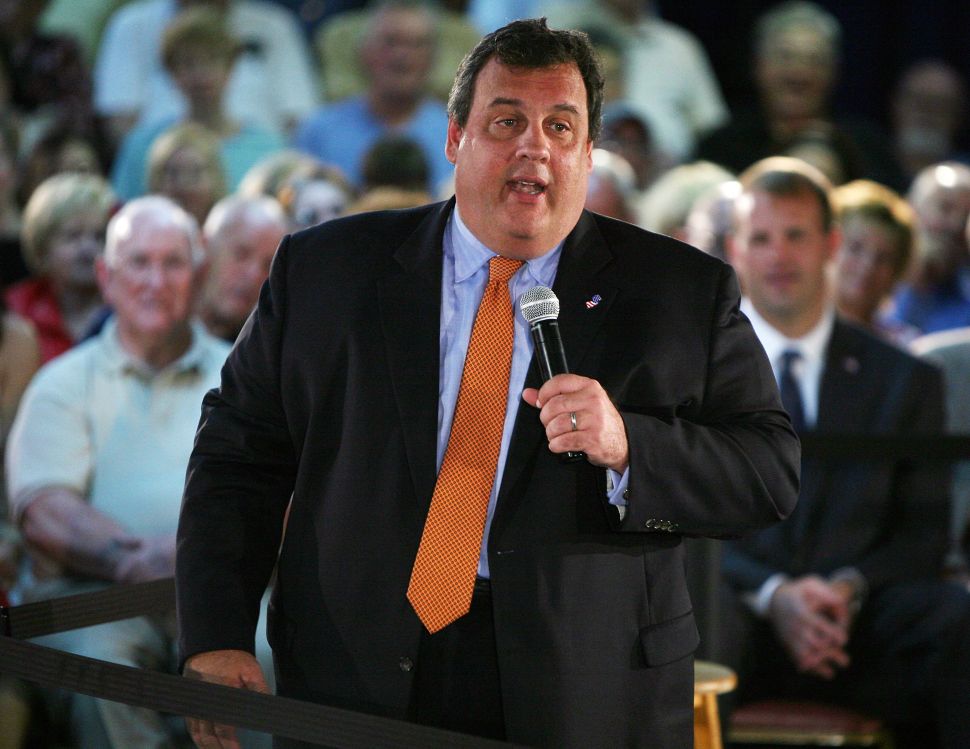