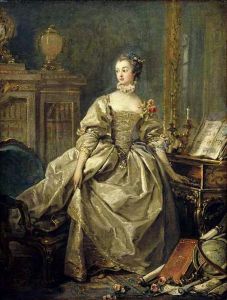 A circa 1750 portrait of Madame de Pompadour by Boucher in the collection of the Louvre. (Courtesy Wikimedia)

Many of the portraits of Madame de Pompadour, the mistress of French King Louis XV, by artists like Boucher and Nattier, are in public institutions, and out of the reach of collectors. However, those seeking a bit of her aura can bid at a Dec. 6 auction at Christie’s London for a desk she once owned. The Japanese lacquer secretaire carries a minimum estimate of £3 million (about $4.9 million).

The choice lot is part of a trove of 50 or so 18th-century furnishings hitting a block that evening as part of a sale with the title “L’amour n’a pas de prix” (“Love has no price”). Good title.

Bloomberg BusinessWeek has a bit about the possible identity of the seller:

The items have been in the collection of a Paris-based Iranian businessman, Djahanguir Riahi and his wife, though Christie’s wouldn’t divulge the identity of the current owners.

Such furniture, the magazine notes, has seen a steady increase in its prices recently.

It happens that Madam de Pompadour has a really great fan site. Well worth a visit.