“I have a right to speak,” Devine shouted, before police escorted him from the scene.

“Pay your child support,” a woman shouted as Devine went to move his car.

A political consultant for Billy Delgado, who’s running against Diaz in the November mayor’s election, Devine showed up uninvited to the event where the mayor and Democratic elected officials criticized the operative for sending the mayor email denouncing her as too dumb for her job.

“I have been receiving emails, disrespectful and actually an embarrassment that I would be receiving, the chairman of the board, the person that has to deal with the worst corruption the city has ever seen,” said the woman who beat the jailed Mayor Joe Vas. “I was receiving those emails calling me stupid and saying I couldn’t be with my counterparts. I knew I had to put a stop to that. I’m proud to be elected the first woman in the history of Perth Amboy.”

Then Devine tried to speak, blocked out by the jutting shoulders of approaching police officers.

After moving his vehicle, he later returned, sat, and took questions from the media.

Fighting off a murmur of disgust created by his presence on the green, the controversial operative ackowledged he went through “a messy divorce.”

His ex-wife Dawn filed a complaint in Union Township in 2007, charging her husband with beating her up, “striking her in the stomach with his elbow, pinning her against the car, causing a bruise to the arm and elbow,” according to the 2007 complaint.

“I was never guilty,” he said.

He decribed himself as an ardent feminist.

“The women there castigating me today disappointed me,” Devine said later. “They don’t know me.”

The operative also objected to police preventing him from addressing the mayor at a public event. 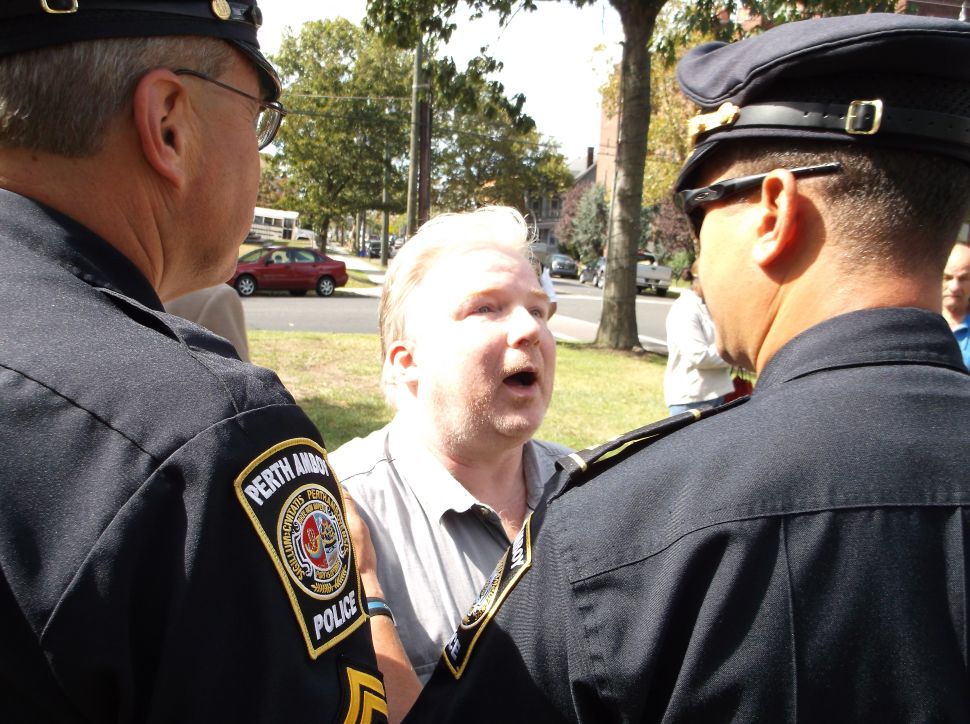