Opinion has been split over the new Google Glass glasses, which are surely some type of CIA/Jason Bourne/Total Recall prototype that someone accidentally leaked the schematics for over Gmail. Right? These things cannot be designed for regular citizens, especially since they make no sense.

But they’re not quite as ugly as people are making them out to be, and when Diane von Furstenburg decided to do a quick mini-doc about her Fashion Week show, putting these recording glasses on all her models was actually a genius idea. (Maybe?!) (We don’t know!) (You tell us.) (Video after the jump.)

Von Furstenberg’s use of Google Glass is fine as a personal narrative, but her story could have been captured just as well with a mobile phone, a GoPro helmet-mounted video camera, or some other video device in a small form factor. Granted a fashion show may demand something more subtle than a strap-on camera, but few future Glass customers will be runway models.

We might disagree. If developers wanted people to use this product, we need to be convinced that the Google Glass wouldn’t interfere with our everyday life … meaning that we would need something more subtle than a strap-on camera. This is one case where fashion might equal functionality. 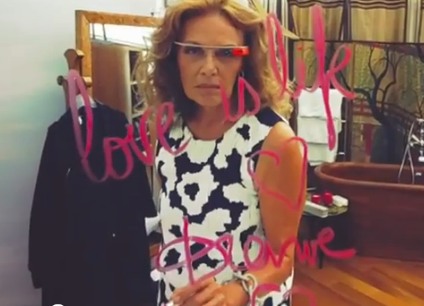