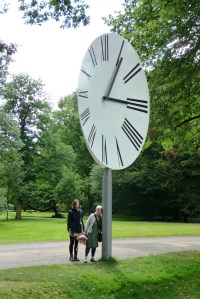 A clock by Anri Sala at Documenta 13. (Courtesy yellow book/Flickr)

The 13th edition of Documenta, the epic 100-day art exhibition held every five years throughout the museums, buildings and public spaces of Kassel, Germany, closed on Sunday, and organizers announced that it had attracted a total of 860,000 visitors, the highest number ever achieved by the show. The previous record holder had been 2007’s Documenta 12, which saw 754,301 visitors. Attendance has increased with each show.

Documenta 13—or dOCUMENTA (13), as organizers styled the title of the heady show—also offered a satellite exhibition in Kabul, Afghanistan, which drew 27,000 people.

Organizers also trumpeted the increase in season-ticket passes, which allowed people to return to the show again and again over the course of the 100 days. Some 12,500 people purchased them this year compared with 5,900 for the previous edition. (The show was so voluminous that one needed many days to see all of the work.)

According to an industry report, Walt Disney’s Magic Kingdom received about 16.97 million visitors in 2010. That works out to about 4.65 million visitors every 100 days (assuming a standard flow of visitors throughout those days), making the Florida theme park that year about one-fifth as popular than this year’s Documenta.